You just have to be calm.
If you live in Genopolis, anyway. You should be calm -- it's best. Calm is looked upon as the only way to be. Emotions -- tears, panic, anger -- are studied with all the concentration of a scientific community. Those things have been bred out 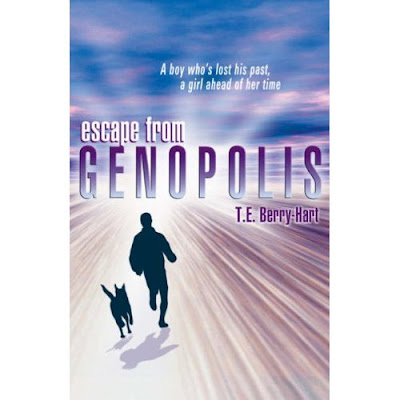 of Genopolis citizens ages ago. 'Naturals,' those crazy, passion-ruled people, live outside of the city gates, and are routinely hunted for extermination, to be used for experiments, and ...to serve as bodies for those whose genetic manipulation has come to an end. You can only cheat death for so long in one body, after all, so why not harvest a Natural to replenish your gene pool?

Geneopolis has pharms where children are cloned and sent out as servants and future - living - organ donors for the citizens. That's where Usha grew up, she was born to be a Geminis. Arlo is a privileged citizen, training to be a doctor, the only child in a gated compound filled with doctors. Some of them are sadistic, sarcastic and cruel, and like any child with any teacher, Arlo has learned to avoid them -- as much as possible anyway. But it's not always possible to avoid your fate. Usha takes care of "Auntie," and is content to do so -- it's her whole life, all she knows. But Arlo and Usha's world begin to unravel at about the same time. And when they both discover the horrifying truths about themselves, their true identity and their real function, it's only a matter of time before their worlds collide.

Genetic manipulation, climate change and class distinctions and the 'other' are only some of the subtle issues explored in this standout book. Usha and Arlo are distinct characters within a clearly constructed world, and the narration moves smoothly between their two points of view. Sometimes some of the other children seemed a bit over the top in their bid to be spectacularly awful, and the ending came a bit too quickly for what had been a perfectly paced novel, but this is a tensely written, tightly constructed story which is a read-it-in-one-setting page-turner. Fans await the sequel -- because only time will tell if anyone can Escape From Genopolis.
Posted by tanita✿davis at 5:17 AM
Labels: Adventure, Fantasy/Sci-Fi, Guy Appeal, Reviews