And More from the Blog World

Professor: Let me introduce you to Shannon Bryner [Shannon Hale's maiden name]. She was one of my students.

Professor: That's right! I heard you wrote a couple of kids' books?

I could've mentioned the Newbery Honor but I don't think it would have meant anything to her. I could've mentioned the New York Times best seller list and published in 15 languages and that sort of thing, but that would have been a real neener-neener, wouldn't it? I usually don't offer information about my profession to people I meet. I'm a stay-at home mom and I'm happy for people to assume that's all I do. And the awkwardness of the replies, "Oh! Children's books. Hmm..." is something I like to avoid.

"A couple of kids' books?!"
One wonders if with the advent of Austenland, that kindly professor's opinion of Hale has risen, or -- ? Anyway, read more of Shannon Hale's three part conversation with author Megan Whalen Turner.

Oh, dear. We've many of us complained about the complete bewilderment that is the alleged cinematic version of The Dark is Rising. The fact that now Susan Cooper seems a bit confused by it makes me quite sad. "You do have to do violence to a book to make it into a screenplay — the two mediums are so different," she says. Violence - a grievously apt word, methinks.

Meg Rosoff suggests writers get ready for that one question that always gets asked... And no, it's not "where do you get your ideas?" That's actually, in some ways, easier...!

Via Jen Robinson's Book Page, a quiet phenomenon that started with former California journalist Jeff Rubin's National Punctuation Day has sprouted wings and is fluttering across the hemisphere. After Jen initially reported on the event, she heard from an Aussie who was interested in making it a 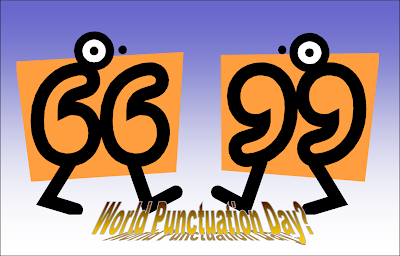 People, this is exciting! I already enjoy dropping by the amusing blog of unnecessary quotation marks -- those are simply fun. But with a World Punctuation Day, my Most Egregious Misuse postings would fall into dust -- And I would be thrilled! And to think we'll be able to say we "knew her when!"

Jen Robinson: helping to change the world, one egregious punctuation misuse at a time...
Posted by tanita✿davis at 4:46 AM
Labels: Random Notes and Errata, Views

I was inspired by you (with your MEM posts) in my support of punctuation. I hope that World Punctuation Day helps!

Loved the Meg Rosoff column. That is a really hard question. Actually, I think it's harder than "where do you get your ideas," but the latter is more irritating.

Didn't the interview with Cooper break your heart? She had her own screenplay and even sent them suggestions. I hope she is heartened by the outrage from her fans.