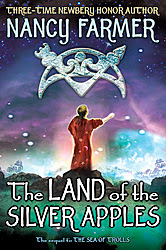 If you enjoyed Nancy Farmer's book The Sea of Trolls, you'll be happy to find out that there's a sequel to Jack's adventures as a bard-in-training. The Land of the Silver Apples brings readers back to that same vividly realized setting of early Christian Britain, where a myriad of old belief systems coexisted next to the rapidly growing beliefs of Christianity. Farmer brings this crossroads to life, juxtaposing the fantastical creatures and "old gods" of the Saxons, Picts, Norse, and Britons with everyday village life and early Christian monastic traditions. She again succeeds in doing this without being dry at all--on the contrary, she invests each scene with lively detail.

Since being rescued from the trolls in Jotunheim, Jack's sister Lucy has seemed to cling more and more stubbornly to the fantasy that she's a princess removed from her parents and put upon by life in a meager village hut. When her selfish, whining behavior nearly results in the ruination of a crucial village ritual, it's decided that Jack; his parents; his mentor, the Bard Dragon Tongue; the humble monk Brother Aiden; and the former slave Pega will take Lucy to be exorcised at St. Fillian's monastery, home of a holy well.

But when the Lady of the Lake imprisoned in the well kidnaps Lucy and flees, Jack finds himself on yet another adventure to free his sister--one that will introduce him to hobgoblins, half-fallen angels, and creatures that are the stuff of nightmares. Again, I'm floored by Farmer's ability to take reams of research and turn it into a tale that's not only fascinating and fantastical but feels so real. The only thing I'm left wondering is whether there's going to be more...
Posted by Sarah Stevenson at 12:42 PM
Labels: AF, Fantasy/Sci-Fi, Historical Fiction, Reviews