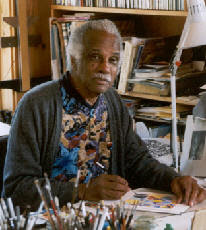 ...mainly so I can look at this snowflake all day. ASHLEY BRYAN is a beautiful person, so engaging and amusing and lighthearted. You wouldn't know he was in his eighties. You wouldn't know that he had faced discrimination, privation and poverty. You wouldn't know anything except that he is a joyful person, and that joy makes me feel humbled, like I ought to get up and dance more often, or meditate on the vastness of the infinite, and be grateful. The joy he embodies in his art is immense, he's something so special. Should you ever get a chance to attend USF's Multicultural Children's Lit Conference, Reading the World, DO. It's where I got to hear Mr. Bryan, and I have had an illustrator crush on him ever since. He's fabulous, fantastic and fun. One of the other snowflake posts this past weekend mentioned that in Japan, paper sculptors are treated like sports stars. I am ALL about that. Let's get some big rings, high-paying contracts and celebrity commercials for these guys. Wow. Go look at the man's snowflake.

(Okay. After reading this? Jules cannot be blamed for making me a picture book nerd. I mean, the nerddom was already well on its way. Whoa!)

Also: today is awesome lino block/woodcut day. I mean, look at Consie Powell's snowflake over at BLBooks! I love her work anyway. It's so clear, so precise, yet so friendly and accessible. You don't look at her illustrations and think "Eek, science manual," yet they're that painstakingly rendered, that anatomically correct. I grew up with parents who discouraged me from reading books with anthropomorphic animals wearing clothes (*cough* M-I-C-K-E-Y) and so the real has always appealed to me. Great stuff! On the other end of the spectrum is the freeform, light bringing dragon/dinosaur deity guy, which I really like, too. Just a good day in the snowflake world. A good day all 'round.

And YAY for the Cybils SF/F leader, Sheila Ruth! Another great 7-Imps interview where we find out that yet again, if the bloggers in the YA/children's blogosphere all got together some place, we could seriously start our own country -- or run one -- quite well. Meanwhile, Chasing Ray has some good thoughts on the serious -- the political climate, the real issues in the world, vs. literature... I, too, lately have wondered what I am doing with my time and my words. As a writer, these questions have caused me to begin a manuscript for a book about freedom, belief and deception that I never thought I'd be able to write -- and am still not sure that I can. But I, too, want to do something good... so the goal is to try.

Book Bits
O...kay. HarperCollins is collaborating with MySpace to produce... wait for it... a children's book. In one of the more interesting amalgamations I've discovered today, the teens who participate by sharing their ideas will be unpaid, but their usernames and geographic locations will be included. Huh. Got to think about that one...

NOW is the time to submit: Manuscripts must be postmarked after October 1, 2007, but no later than December 31, 2007. The 26th Annual Delacorte Press Contest for a First Young Adult Novel is on.
Posted by tanita✿davis at 1:53 AM
Labels: Happenings, Random Notes and Errata, Views

TadMack, I would love to go to that SF conference you mention. I think I'd have a ball. I once spent a week in SF by myself. Because of that year's El Nino, it poured every day. I mean, cars-floating-away poured. I got an umbrella and trooped around anyway. I had the BEST time.

The snowflake is amazing. I am so loving reading about and looking at all these lovely snowflakes. Thank you!

Hooray for woodcut snowflakes! Hooray for printmaking! ;) Great ones today, and thanks for the links, too--very welcome distractions!