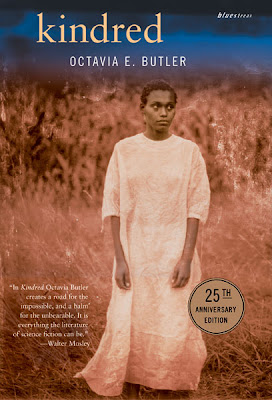 “I lost an arm on my last trip home.”

“Look, your ancestors survived that era—survived it with fewer advantages than you have…”
“Strength. Endurance. To survive, my ancestors had to put up with more than I ever could.”

Octavia Butler's imaginative and thought-provoking Kindred might seem a strange choice for Bradbury Season, but I guess chills - spooky feelings and shivers are where you find them. I don't usually waste my fear on amorphous things in the dark. The things I fear are real, and the depravity of an inhuman being enslaving another leaves me with a sort of bottomless horror, a horrible cold tightening of my heart as if it were an exposed nerve painfully jangling.

Many of Butler's novels carry similar themes of abuse of power, gender role issues, and racial conflicts. Kindred carries all of these within the loosely science fiction package of time travel. A 20th century woman, Dana Franklin, is ripped from the present into the past every time a young man's life is in danger. In the 1800's, though light-skinned, Dana is seen as African, and Africans in 1800's Maryland were slaves -- and nothing else. Her first meeting with the boy, Rufus, she saves him from drowning. Subsequent meetings with him reveal to her that he is her ancestor, and she must save him. If she does not -- she will not have been born, and history will unwind, losing her within it. 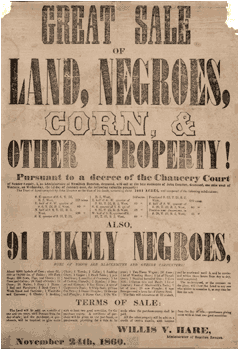 Kindred depicts clearly the ways in which the American system of slavery was complex. Dana's great grandmother, Alice, is adept at running away, far more adept at it than Dana. But she, together with Rufus, are the key to Dana's own existence. Dana is torn between wanting to help bright, determined Alice in any way she can, all the while knowing that any help she gives may mean she ceases to exist anywhere but in the 1800's, a horrifying thought, as her husband, Kevin is back home, beside himself as his wife fades in and out of the present. Kevin coming with - in an attempt to understand and solve the issue of her vanishing - proves even thornier -- he is Caucasian, and is immediately in a position of power over his own wife. He wants to be with her and to protect her -- but she's obviously "sleeping with the enemy," losing the trust of her ancestors, and causing a rift in her own marriage, as the imbalance of power begins to take its toll on Kevin and Dana in relation to one another. The whole tale twists in ways the reader never expects, wounding, warping and mutilating everything -- as slavery does -- forever.

Butler came up with the idea to write the story in college after hearing one frustrated young man, humiliated and embarrassed by an ancestry he saw as weak and servile, frustrated by their acceptance of disgusting and disrespectful behavior in the workplace and in other areas say, "I'd like to kill all these old people who have been holding us back for so long. But I can't because I'd have to start with my own parents."

Having no real understanding of the lengths slaves went through to keep their children "safe," within the flimsy protection of their home plantation, and alive, this confused young man actually blamed people he assumed to be meek, bowing, scraping "Uncle Tom's," who had "held him back." Butler carried this conversation with her for thirty years, and wrote her book in 1979. She said,

'And I thought about my mother, because she used to take me to work with her when she couldn't get a baby sitter and I was too young to be left alone, and I saw her going in the back door, and I saw people saying things to her that she didn't like but couldn't respond to. I heard people say in her hearing, 'Well, I don't really like colored people.' And she kept working, and she put me through school, she bought her house – all the stuff she did. I realized that he didn't understand what heroism was. That's what I want to write about: when you are aware of what it means to be an adult and what choices you have to make, the fact that maybe you're afraid, but you still have to act.'‘

Butler's creativity is even reflected in the title. Kindred not only has the obvious meaning of 'family,' kindness and a fellow spirit, but there's an aural aspect of the play on words - kin dread. Finding that your ancestry includes both slaves and masters certainly produces dread in Dana, and gives the novel a pall of Gothic darkness and grimness as Dana is buffeted by things outside of her control - just like a slave.

Butler forcing us back in time, together with her character, symbolize our repeated visits to the past, trying to make sense of what was and what is now. Through Dana's eyes, we see the slaves make the choices that they can, within the circumstances that they have. We better understand that the decisions before them were more chilling than any ghost story, and the heroism they showed was more than simply defying death -- but was defying life, grinning into its polished fangs, and living anyway.

Between 1997 and 2001 The SciFi Channel put together an amazing thing called Seeing Ear Theater, an audio theater. Kindred was recreated starring Alfre Woodard as Dana, Lynn Whitfield, and featuring the actress Ruby Dee. Arguably one of the best audio adaptations of any book, this version is no longer available, as Seeing Ear became defunct in 2001. Still, hopeful fans poke around SciFi's abandoned website with optimism.

"In Kindred," Robert Crossley wrote in his introduction to the novel, "Octavia Butler has designed her own underground railroad between past and present whose terminus is the reawakened imagination of the reader." The work of Octavia Butler certainly does that. This is my tribute to her, as a woman whose writing I have loved and whose creativity I can only hope to imitate. Some said she took a sensitive subject and trivialized it, writing a "sci-fi novel" about slavery. I believe instead she took winding cloths off of an old wound, and showed that it still festers, and needs to be cleaned...

If you haven't yet experienced Kindred, choose a quiet night with a lot of wind, and jump in.

There are more stars in this crisp Bradbury Season sky. Don't miss two from the Interactive Reader, the cutest monster ever from the 7 Impossible Things Before Breakfast crew (and MAN does that monster need a sandwich -- and a better agent!), the TERRIFYING Neil Gaiman at Writing and Ruminating, and more Bradbury Season type book reviews for all ages as they sparkle throughout the day at Chasing Ray -- the blog that started it all.

This is great Tanita - and exactly the kind of original book recommending that I wanted to highlight with Bradbury Season.

Kindred is an incredible book--really wrenching and frightening in the way that books showing the dark side of humanity can be...

This looks so good. I used to read much more SF than I do now, and this makes me remember why. There's just no other medium that works as well to tell those stories that we can't bear to look at straight on sometimes. It's going on my TBR pile right now.