"So why do we teach history to our children? Is it for the glow of pleasure we get when we hear their cherubic little mouths repeating the names and dates of all the kings and queens since Edward the Confessor, each battle they fought, every treaty they signed and every head they (personally) struck from renegade shoulders? Or is history principally about humanity? Understanding when leadership becomes tyranny and why holocausts and genocides happen?"

Beth Webb, author of the fabulous Star Dancer series talks about fiction having just as much importance as fact when children select books on historical fiction. Is there a such thing as misleading children with the fictional aspects of historical fiction?

OH. MY. Can you spot the SINGLE correct usage in this window?! 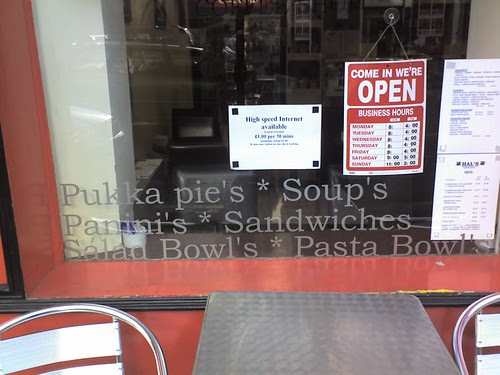 Harper Lee has been known for years as one of the most reclusive writers in our modern world. Her book was so timely a reminder of the realities of segregation and the equal rights struggle that she seems almost magical, or prophetic - she appeared when she was needed, and has virtually kept her silence ever since. Her Presidental Freedom Award means that she will soon get a chance to meet George Bush, and have a moment in the spotlight once more. Wouldn't it be something if she found something else timely to say to the nation again?

DON'T miss the great cynsations interview with the very complex and thought-provoking Pooja Makhijani. She is, reportedly, "slowly working on a YA novel." Much squealing here!

Oh, yeah, everybody's excited over the tree-topper at Seven Impossible Things Before Breakfast -- but do YOU have a Hanukkah bush? This would go with it perfectly.
Posted by tanita✿davis at 5:50 AM
Labels: Happenings, Literary Life Observations, Most Egregious Misuse, Views

So an apostrophe just didn't goe with the "e" in sandwiches? I almost feel sorry for "sandwiches." It's so left out :(

Awwww... thanks TadMack. Your cheerleading means so much to me!

Time for spraypaint, I think, to aid the grammar pixies in the ongoing struggle to liberate apostrophes.

A friend of mine who is a history major gets so wigged out over the inaccuracies in historical fiction books. She says, "I would rather they (the authors) just make everything up from scratch, rather than try to make things fit in the wrong way." I think it was The Secret Life of Bees, a book that had its own problems besides historical accuracy, that clinched it for her.

I had forgotten that Harper Lee was still alive. I admire her so much, and am thankful for To Kill a Mockingbird.

Kelly, this sign made me do a complete double take walking down the street. Sad!!!

:) Pooja I can't WAIT to read your YA novel, though, seriously!

Alkelda, your friend is definitely not in the minority; most people are fact junkies, but I'll not forgot anytime soon hearing John Green speak. He said a writer must never "pursue facts at the expense of truth." I still am turning that one over in my brainbox.