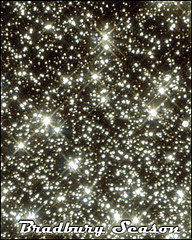 In honor of the blog community event October Country, here's a look at some of our favorite ghost-themed writing, with a special focus on Diana Wynne Jones—a teaser for our exclusive interview with Ms. Jones for the upcoming Winter Blog Blast Tour!

As a writer, I've often wondered what that special "something" is that makes a story about ghosts, or the supernatural, or dark fantasy, seem so creepy and real, that something which makes readers shiver and stay awake at night, unable to put the book down and then unable to sleep after reading it. One of my novel manuscripts, currently under long-term construction and buried in metaphorical scaffolding, is in part a ghost story—and one of the questions I ran into while writing was how to give the ghostly "visitations" enough of a sense of fear and urgency to propel the story along, while also making them unusual enough to stand out from the crowd while remaining believable. It's a tall order, and it takes skill to do it well—despite the plethora of horror-themed series novels, I think that it's a select group of teen ghost stories that are truly memorable.

A few of these we've reviewed on Readers' Rants-- Charles De Lint's The Blue Girl is one tale of a ghost-and-spirit-haunted high school in his fabulous fictional city of Newford. Another one we enjoyed was Laura Whitcomb's A Certain Slant of Light, told from the point of view of a ghostly narrator who has somehow ended up haunting a high school English teacher. Jennifer Allison's quirky Gilda Joyce books are both funny and creepy. And, as always, anything written by Lois Duncan is sure to be a chiller.

Like Whitcomb's narrator, the narrator of Diana Wynne Jones's novel The Time of the Ghost is a restless spirit. She starts off not knowing who she is or how she got to be wandering a deserted road, but she knows that something is wrong and there's been an accident. She finds herself drawn to a nearby boarding school for boys, and it seems that…she used to live there. And those three bizarre and unkempt girls, daughters to the school's owners, are her sisters. But how did she get to be a ghost? Why does she keep having this horrible feeling of wrongness? And who is she, really?

This story has a number of truly interesting twists and turns. Moreover, I found it fascinating because I've read so much of Jones's other work, magical and charming and often quite funny—and this tale was dark, thorny, and uneasy. In all of her novels, the stories' heroes are human with their own quirks and faults; this makes them real to the reader and makes her fantasy settings thoroughly engaging and believable. In this one, the quirks and faults are what make the characters strange and disturbing—nobody in the story is perfect, and their faults, their hang-ups and personal problems and family issues, make them vulnerable to something darker than they could have imagined.

So, go forth and enjoy some ghostly October reading, including the other wonderful Bradbury Season posts...and if you prefer your ghosts real rather than fictional, you can always go on a pilgrimage to your local haunted places! (When I checked this site, I was fascinated to find out that two of the places in town where my husband and I like to go jogging are allegedly haunted...and no, we never had any ghostly encounters!)
Posted by Sarah Stevenson at 1:50 AM
Labels: AF, Reviews

Oh, don't forget the classic awesomeness that is JOAN AIKEN!! I LOVE Midnight is a Place. VERY dark and Dickens-esque, full of creepy, tall, skinny adults with bad intentions. The Wolves series is most excellent as well.

Oh, cripes, after asking you and all, I forgot to put that in. THANK YOU for the addendum.

I do find it weird that this is a DWJ -- I've not read it, and I thought I'd read everything of hers!! Well, I'm surely more likely to find it here...