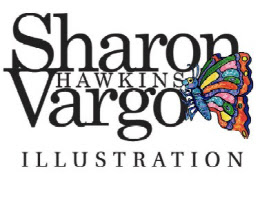 Sharon Hawkins Vargo is a freelance illustrator whose studio is just north of Indiana, where she lives with her husband and four sons. For her creativity and use of a multicultural character, Ms. Vargo received a Bank Street Best Children's Book award in 2002 for SEÑOR FELIPE'S ALPHABET ADVENTURE. This bright and energetic picture book features a toothy bilingual character whose job it is to photograph items to 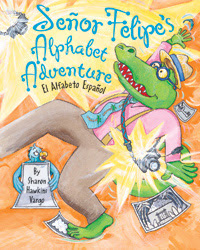 illustrate each letter of el alfabeto Español. With her bright palette and active characters, Ms. Vargo's familiar illustrations are also seen on Play-Doh craft books and on art activity books found in craft stores around the country.

Ms. Vargo has been a participant in the Robert's Snow cancer fund raiser for the past three years, and each snowflake she exhibits for the Robert's Snow is fanciful, unique and colorful in a highly detailed artistic style. Last year's snowflake featured the character Bessie from the picture book Bessie's Bed, a story about a woman who shared her bed with various creatures displaced by a thunderstorm.

Sharon Vargo's 2007 snowflake is brighter and bursting with more detail and action than ever before. Illustrating a poem by Rebecca Kai Dotlich has provided Vargo a platform to showcase her talent for color and movement. "Song for a Prince in Pajamas" is a fun, busy piece. This little prince looks like he's meant to be in bed, but no -- there are bells to ring and phone calls to make instead. The whimsy of telling secrets to toads and writing poems to cupcakes reminds me of a little friend of mine who reads to dogs. This is definitely one of those rollicking, accessible poems written with the true essence of childhood in mind. 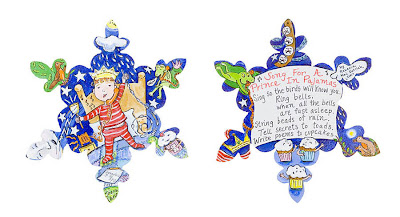 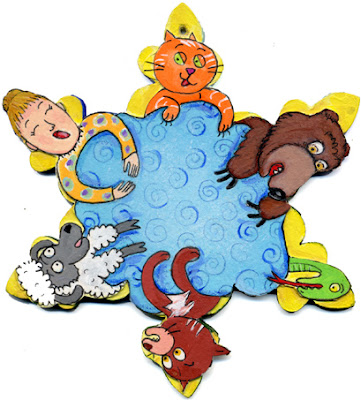 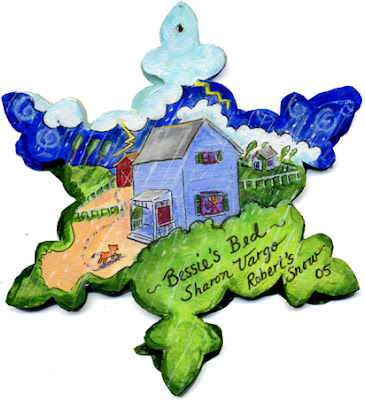 Sharon Vargo grew up knowing she was going to be an artist, and knew from the second grade that she wanted to create her own books. As Ms. Vargo lives her dream, her continued participation in Robert's Snow helps to further the dream of a cure for cancer someday soon. Auction One for the Dana-Farber Robert's Snow fund raiser opens for bidding on November 19th. Plan now to bid early and often! 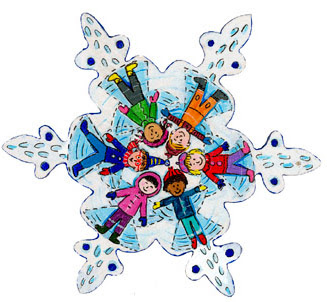 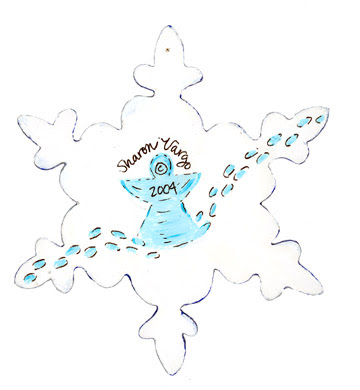 (There is snowflakey goodness all around us, yet this isn't even all of the illustrators! These are only the ones that the Dana-Farber Cancer Institute had ready to go when Seven Impossible Things Before Breakfast began organizing this blog PR event. So, don't forget: to see ALL of the snowflakes and find favorite illustrators you might have missed, go check out the auction pages at Robert's Snow.)

Keep up with the snowflakes from the blog tour by visiting tour organizer Jules at Seven Impossible Things Before Breakfast to find each day's schedule, and look at post archives and interviews.)

Posted by tanita✿davis at 11:49 AM
Labels: Happenings, Views

Thanks for this look at all of Shaorn's snowflakes. My daughter told me she liked Sharon's 2005 snowflake so I bought it to give to her as a Christmas surprise. I wrote to Sharon to tell her what I was planning to do with the snowflake she created for Robert's Snow--and she sent me an autographed copy of BESSIE'S BED to give to my daughter along with the snowflake. I REALLY appreciated her thoughtful gesture!

Write a poem to a cupcake...now THAT is a good idea! Especially if you get to eat it afterwards...

How adorable! I could easily see this on my tree! What a fun snowflake and great interview.

How neat. A poem on a snowflake.

TadMack, great job! That is a nice post, and I'll have to check out her books for sure.

I love that snowflake, and it's the first one I've seen with an actual poem/text on it. And I'm with Sara -- writing an ode to a cupcake would be fun.

Thanks for participating (and for all your support and enthusiasm for the project -- and all your snowflake comments everywhere. I see the picture book conversion happening in you already. Mwahahahahahahha)....

The poem, pajamas, cupcakes: so adorable!
The feature,layout,mention of an alphabet book: wonderful :). Thanks so much.

Ooh, I like this snowflake! Thanks for this feature; I'm really enjoying getting to know a bit about so many wonderful illustrators via this blogging for a cure effort.

I saw this one when we kicked off this effort and a took some time to look at the snowflakes. I just love the inclusion of the poem. Thanks for a great feature.

So wonderfully cute. And what a great story about the creation of these.

OK, I hope this flake gets double bid-o whammies, what with the poem and all. I mean, come ON!!!

I was 'snowed under' to see the wonderful write up on my Robert's Snow flakes and everyone's kind
words. Thanks!! ~Sharon Vargo : )

Thank you for a great post. I love the bright colors.

This snowflake is fun and colorful. Plus a poem? What's not to love? Thanks for highlighting this.

Thanks for introducing me to a new illustrator!