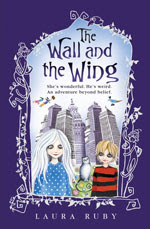 One is born, the professor remembers, only once every century. And, he's been waiting for her for a long, long time.

But so has someone else. A couple of someone else's, one of whom is incongruously named 'Sweetcheeks.' The professor finds out -- he's anything but sweet.

The 'one' everyone is waiting for, meanwhile, hasn't got any idea of who is waiting for her, or what she's supposed to be. Living at Hope House for the Homeless and Hopeless, she doesn't even have a real name -- the orphanage matron calls her 'girl,' and amends the spelling to 'Gurl,' so it's a sort of name. She is genially hated in the orphanage, pitiful and soppy and aggravating. All the other kids know what's wrong with them -- in a world full of flyers, they're landbound, and will never be anything else. Smart people can fly. Good people, rich people, and lucky people, and the Wing, the fantastic stars of the skies -- they can fly. But the flying gene has skipped the gang in the orphanage, and they know it. Though they practice daily, they will never leave the ground.

It's like Gurl doesn't even care, though.
Which means there's really something wrong with her, and her fellow orphanmates hate it when somebody's different.

Gurl's always afraid or cringing, and she's always just trying to stay out of the way. It's like no one ever sees her! She finds herself being overlooked, not noticed... and then, she realizes... that's because she's...

No, really. Invisible. At first it happens only when she's afraid, but before long, Gurl learns to control her power. Not before she's noticed, though. There's a boy called Bug who's seen her do it. And the orphanage matron's, Mrs. Terwillinger, has seen her, and has plans of her own, including blackmailing Gurl to steal for her. Sweetcheeks has plans for Gurl - plans that include her leaving the orphanage forever. Bug's plans include Gurl running loose with him.

Gurl's got plans of her own, maybe. If nothing else, she's going to break out of the prison she's been brought to -- and fly.


The Wall and the Wing is an eccentric and creative book. There are lawns growing out of people's heads, attack cats, sewer rats -- that can talk -- and diaper models who grow up to be gangsters. It's oddly wonderful, and the sequel should be a hoot as well.
Posted by tanita✿davis at 6:03 AM
Labels: Fantasy/Sci-Fi, Reviews