Who can chart the vastness of Incarceron?
Its halls and viaducts, its chasms?
Only the man who has known freedom
Can define his prison.
-Songs of Sapphique 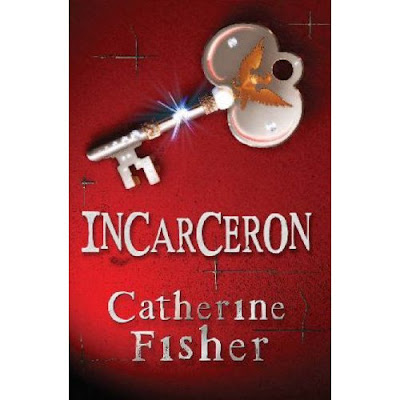 Finn woke in the prison, frightened and -- blank. And he's been there for three years, living in the underbelly of a filthy, violent, thieving gang, a star seer, taken with strange epileptic fits, dreaming of strange things and a place he believes might be Outside. His venial, charming oathbrother, Keiron, thinks he's quite mad, but keeps him around -- he's useful, after all, and the Sapient, Gildas, seems to truly believe in him.

On the flip side of the coin, a girl named Claudia lives in pampered isolation. She is meant to be a princess, her father has plotted since before she was born to marry her to the prince of the realm. When she was seven, it wasn't so bad -- the prince of the realm was a boy called Giles, whom she actually liked well enough, but his death -- sudden and strange -- seems more than the accident it is claimed. Now the Sia, the Queen, has one other son to be crowned; cruel and shallow and impatient, she believes he will dominate Claudia, while Claudia's father, the Warden of Incarceron, believes otherwise.

Is Giles really dead? Or has the Warden plotted in more treasonous ways than Claudia knows?

Is Finn really from the Outside? Are the memories that convulse through him his -- or someone else's?

Mazes of betrayal and prisons within prisons catch the reader and hold them hostage. Incarceron is much, much more than it seems.
Posted by tanita✿davis at 6:53 AM
Labels: Fantasy/Sci-Fi, Guy Appeal, Reviews