Fear of the Unfamiliar... 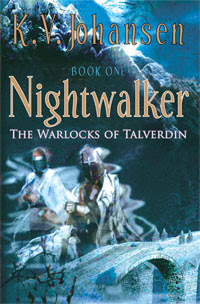 I like being pleasantly surprised by books--picking one at random, or taking a chance on one that doesn't necessarily seem entirely my cup of tea, at least, judging from the cover blurb. Book One of K.V. Johansen's Nightwalker: The Warlocks of Talverdin was one of those pleasant surprises.

Maurey was supposed to be a pupil at the grammar school of Fowler College--his guardian had paid for it, and when she died, she left enough for him to continue his tutelage. But the corrupt masters of the school, including the King's Chancellor, demote him to servant status and turn a blind eye when the other boys torment him. Night-eyes, they call him, or Nightwalker--with his dark hair and dark eyes, he looks a bit like the warlocks of old who were driven out to the far west of the island in a purge that, if you're a history buff, will stir up thoughts of the druids being driven out of Britain by the Romans.

He insists it isn't true--after all, his mother was definitely human. She showed up one night at his guardian's doorstep, and died shortly after Maurey's birth. But is there truth to the rumor after all? His mother never gave her name, nor the name of his father. There's the strange ability Maurey has of seeing in the dark. And then an unexpected discovery reveals a truth Maurey never suspected; a truth that strikes fear and anger into the hearts of the corrupt Chancellor Holden and his cronies. Maurey is sentenced to death, but rescued in the nick of time by a young baroness who doesn't like Chancellor Holden any more than he does. Now they're both on the run, and the only place they can think to go is the forbidden land of the warlocks of Talverdin.

This was a deceptively simple story--an adventure, on the surface, but one in which weighty subjects such as prejudice, misunderstanding, and politics are deftly woven in. It's a fantasy, but one that's appropriately and effectively grounded in realistic themes. Though there isn't anything particularly brand new about the setting or the fantasy elements, it's a well-told and well-written story that leaves me looking forward to Book Two.
Posted by Sarah Stevenson at 7:04 PM
Labels: Adventure, AF, Fantasy/Sci-Fi, Reviews

I never would have looked twice at this, based on the cover, but now I might be tempted...were it not for the fact that I still have 80 of the ya Cybils nominated books to read.

Now that we can officially discuss these: YES. Major agreement. I was on page three when I said out loud: "YES! A well-written book!" The cover does it NO justice, hopefully word of mouth will get it run again and a new cover, perhaps, could be selected... maybe a b&@W castle picture with a colorized boy, eyes to the side, looking terrified? Something!