This book is a 2007 Science Fiction & Fantasy Cybils Award Nominee.

It wasn't meant to be stealing.
Well, it was stealing, but only a little bit -- nothing bad. It wasn't like they stole from anybody. It was just a wishing well, and Josh went down it to save their bums. They needed to get the last bus home, and they needed the cash. Josh was cool, and sharp -- always thinking. He was smart. Chelle and Ryan were just grateful he let them hang around, always wanting to please. But they weren't bad kids. They didn't mean any harm. 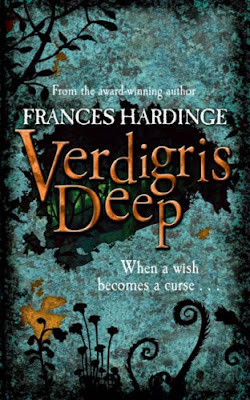 But never mind their intentions: the wishing well in Magwhite had a Guardian, a Keeper, and already she has changed them, as surely as rust turns copper a Verdigris Deep green. Ryan, whose trick of making himself smaller to leave room in the house for his two larger-than-life parents, thinks he only wants to be a hero -- once -- but now he channels the will of the Guardian of the well. Chelle, with her garrulous tongue is suddenly not just running her mouth from an empty mind -- she's running her mouth with other people's minds -- and some of their minds are terrible. And Josh is powerful -- magnetic -- electric. And machines all around him pop and fizzle and explode. Josh has a better feel for the power than any of them -- and he wants more.

The creepiest thing about this book is its deep down truth: that people are made up of wishes and hopes and thoughts, and not all of them are nice and easy or straightforward. Most of us are made up of secret, frustrated, muddled desires. What do you think would happen if all of your wishes came true? "I just want to be left alone." A blessing, or a curse?

Frances Hardinge has written a fantastic, multi-layered novel that has all the pace and suspense of a headlong slalom down a snowy slope on a cello case. Hardinge shows more of the wonderful runaway writing style we enjoyed in her first book, Fly By Night and even in the tense moments, weaves in flashes of humor and insight. An ordinary morning in the grocery store parking lot turns into a terrifying episode. Those things with "far too much body language for objects with no heads or limbs," will have you looking sideways at shopping carts forever. Highly, highly recommended.
Posted by tanita✿davis at 4:57 PM
Labels: Adventure, Fantasy/Sci-Fi, Guy Appeal, Reviews

Crap, I can't wait for this one! You know how I loved Fly By Night.

It's a great big bundle of OOOH. I feel a strong contender coming on; hope everyone gets to read it!!

I LOVED this book! Sooo much.

Finally read this one after finding it in the library--man. I was just as floored by this one as by Fly By Night.