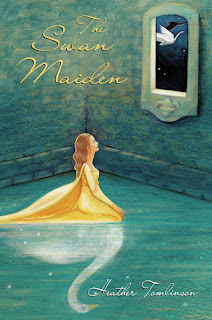 This book is a 2007 Fantasy & Science Fiction Cybils Award Nominee

"Other people aren't us." That quote from Heather Tomlinson's The Swan Maiden is haunting—but it's what star-crossed lovers Doucette and Jaume want to, must believe in order for their love to work.

For others in similar straits have been doomed. Doucette is the youngest daughter of a noble house, and in training to learn all the complicated aspects of running a castle household—while her two older sisters, Azelais and Cecilia, flaunt the sorcerous magic they've been learning. They're swan maidens--sorceresses who, like selkies with their seal skins, can turn into swans and take flight with the help of a feathered swan skin.

Doucette wants nothing more than to perform magic, and experience the thrill of flight...well, nothing, maybe, except one humble young man, Jaume. Jaume is a shepherd, and her parents would never view their match as a suitable one. And her parents have told her she wasn't born a swan maiden like her sisters, so she'll never fly; though of course she'll make a wonderful prize as a wife with all the right skills.

Until the day she discovers her own swan skin hidden in her parents' bedroom. Her parents have been keeping it from her, but no more. But when Doucette takes flight, the new world she opens up is not one of soaring freedom as she'd thought, but one with its own rules and its own ruthless prices for happiness.

I was afraid this absorbing French-inspired fairy tale would be more like Hans Christian Andersen than I wanted (the original versions, not the Disney ones). But after all the fear, danger, and risk, I was ready to cheer at the end. This is a really well-done and touching story of love and of learning inner strength—not just the powers granted by a magical swan skin. It also reminded me how so many of the traditional fairy tales glorified codified Christian virtues such as humility, suffering, and hard work; and vilified envy, greed, and laziness—while also being written down in a time period that still admired chivalrous love. Tomlinson deftly captures all of these aspects of fairy tales while also investing her story with more than enough wit, charm, and adventure to appeal to modern readers.
Posted by Sarah Stevenson at 11:08 AM
Labels: AF, Fantasy/Sci-Fi, Reviews

I've heard good things about this book but haven't got a chance to read it yet. I'll definitely add it to my wishlist now.