Thoughts on a Magnum Opus

Just out of college, I published with a very small religious press, two books. They were, in a word or two, stunningly dreadful, but I was, as I said, just out of college, and not brilliant at anything but being twenty-one and regurgitating facts to get grades. I was lacking life experience, but what I had, I was (alarmingly) willing to share. These books were rather moral-of-the-story tales where everyone was either safely and stultifying good or they were bad and justly punished, and all lived happily ever after. I like to think they weren't that predictable, but I know for sure the narrator's voice was wrong -- the wrong character was speaking because I was too fearful to let the boldest character take over the story; too afraid to let things get that out of control. (This is a tendency I hope to avoid in the future!)

I remember just after the books were released having an acquaintance ask "Don't you want to write something else? I mean, something better than just writing for kids?" To his mind, the combination of publishing both a slightly religious book and a book for children was just the kiss of death. I mean, no Nobel Prizes here, no borrowed glory in which he might bask. I was, of course, offended... 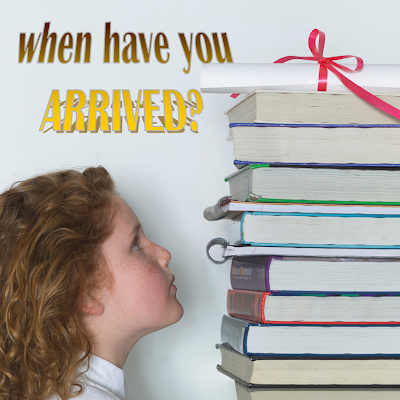 But then the idea took hold. Couldn't I do better than this? Shouldn't I? Were series the thing? Didn't Little House get read forever? What about Make Way for Ducklings or Charlie & the Chocolate Factory. Shouldn't I be writing a Classic?

The books faded quietly out of print, and after a bit more life and a bit more school and a lot more practice and thinking, I've got another chance.

Now Read Roger has asked The Question again: "Is there a mountain a writer is expected to climb? Do you feel the need to write a Big Book?"

What is a Big Book? Catcher in the Rye, which I kind of hate? Or something close to Judy Blume's Forever? Do we have to write The Sisterhood of the Traveling Pants? Something that gets film optioned or picked up by a television studio? What does "Big Book" mean to you? A series? An award-winner?

I could wimp out and say that I'm too new to the game to have any answers but all I can say for sure is that no matter the metaphorical size of the book, the fact that I'm able to share what I write is still a gift. Sure, I want to sell books, justify my school bills and all, maybe even one day write a Big Book, some Magnum Opus that garners me a National Book Award and a lot of flashbulbs, but in all honesty, the idea of that gives me hives. The gift to me is the ability to write -- that someone is allowing me publication is still a major thrill. I'll worry about Big Books -- the next Chris Crutcher/Rob Thomas/Catcher in the Rye/Forever amalgamation -- maybe next week...


'Til further notice,
I'm in-between
From where I'm standing,
My grass is green.

Posted by tanita✿davis at 5:18 AM
Labels: Views, Writing Daze

I honestly didn't know what to make of his question at first. Doesn't thinking about and trying to write a Big Book---a Magnum Opus---lead to the writing of some truly terrible books? Isn't it better to pick a small thing and do it really, really well?

I agree with Sara. Every writer I know who sets out to write the Next Big Thing 1) is only thinking of the six figure advances they hear about from time to time and 2) will only manage to create something monumentally derivative or (as in the case Kaavya Viswanathan) just resort to outright plagiarism in an effort to very quickly achieve that Bigness.

Focusing on being Big removes the honesty that makes the Big Books a success. (Except, I suppose, for the books where honesty takes a back seat to pressing one's thumb firmly on the zeitgeist's jugular and mass producing before one's pan flash fades. Not that I'm cynical or anything.)

I don't think you can write a Big Book by trying to write a Big Book. I read a bio of Laura Ingalls Wilder that said that her daughter Rose--an accomplished writer herself--thought of the Little House books as nice, but not where the true writerly energies should go. Rose envisioned big epic sagas which never came to be. Meanwhile, people fell in love with Little House.
Write what you have to write. The world decides whether it's a Big Book or not.

I agree with liquidambar--I'm not sure that most Big Books were produced with that intent. I'm sure I would love to have written a Big Book, but it would just be icing on the cake of having been able to share my work with the world in the first place.

In a way, everything I write is my Big Book, in that all my creative endeavors are invested with heart and soul and are meaningful to me. Whether the audience judges them as Big, in terms of being award-winning or film-worthy or whatever, is nothing I have control over.

I would be thrilled to just have the opportunity for some readers somewhere to read my work and get something out of it, and to me that would be amazing. And maybe to make a living from writing one day. Anything else--even though I do have occasional nerdy Newbery-type daydreams--would just be an unexpected bonus.

Hmm... I guess the question would have to be whether "big" meant "made a lot of money," or meant "good."

Everyone dreams of writing the Big Book, just like all kids dream of becoming astronauts and presidents. No one ever sets off desperately wanting to be a claims adjuster. And Davimack is right: 'big' means pots of money to most people, but however greedy I may be, I've got a broader, loftier notion of the kind of bigness I dream of achieving.

At this point, I just want to write something that makes people want more. I dream of the glory of knowing that people have read my work, gotten my message and liked it; that having read one book, they will want more of what I've written. If I can make money doing it, then like a. foris said, that's the icing on the cake.

Now I'm back to scanning the newspaper for jobs in claims adjusting.

They were not stunningly bad...they were just young.

I think if you've written something that changes or touches another person, then you've succeeded. I know that doesn't pay the rent nor win awards, but it's why we, as artists, continue to rise each morning.....or most mornings :) Just because I won't sing at the Met doesn't mean that my song isn't meaningful.

I personally want to write the book that is so good, so compelling, my reader misses their bus stop because they are so engaged and have to read on to find out what happens next.

I want to write the book they can't put down.

I want to write the book that a girl somewhere reads and thinks, gee, I'm not alone, someone else feels that way too.

And as much as I hate to quote a teacher a number of us had a while back, I want to write the book I want to read.