Wow, it seems like only yesterday, the Cybils were still in the nomination stage, and we anxiously kept checking the list to see what else we could track down at the library. And now I can report that Saturday night at ...um, midnight in the UK, anyway, our list was pushed screaming into the world.

Oh, it was not an easy birth by any means.
There were those books which each of us were clutching and sobbing over and writhing on the floor and drumming our heels to force everyone else into voting for them because they were our PRECIOUS LOVELY BABIES, but... *sigh* There's just a limit to the number of books we can foist off on the judges without giving them hives, and that's all there is to it. We've got to stop somewhere, but people, the books of 2007 -- are amazing. Thank-you to everyone who took part in the Cybils, by nominating or reading or talking up your favorite books. It's all about the books, isn't it? Look for the Science Fiction/Fantasy shortlist on January 1 to ring in the new year.

So much fun stuff going on! British station ITV has an interview with JK Rowling tonight which the British SCBWI is buzzing about (here's a clip). The documentary follows her through the last year of writing the Harry Potter series. So many people on our Cybils team really responded strongly to the book, so here's hoping this shows up on American TV for the HP7 fanbase sometime soon. 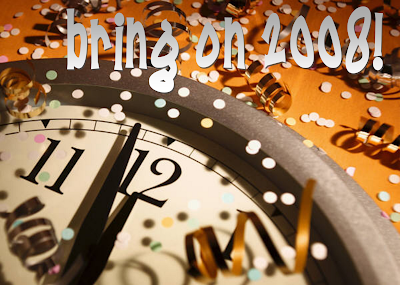 Quite an honor has been bestowed upon children's author Jacqueline Wilson. She's now Dame Jacqueline, having been made a peer of the British Empire. I've only read one Jackie Wilson book, but The Illustrated Mum, about a mother with tons of tats who isn't always able to take care of her kids, due to her bi-polar disorder, left me in tears. She's an amazing writer, is our Dame Jacqueline, and I look forward to reading more of her books now that I'm in the UK (and the Cybils are over).

Once a graphic novel about an Islamic childhood, told from the point of view of a young girl, Persepolis is now a short film. Has anyone else seen this? I'm very interested, and the graphic looks really interesting. Hmm! Something else to look forward to on the TBR list.

Bottom Shelf Books leaves us laughing this year with the best list of book resolutions -- from book characters themselves. The Giving Tree vows this year to stop letting that wretched little boy walk all over her. Stop by to see who else is making resolutions. And don't forget to leave one of yours!

It's bad luck to wish you a Happy Hogmanay, according to Scottish tradition, so I'm not -- until tomorrow, anyway. Enjoy your burning sticks (which is what a Hogmanay is, literally), fireworks, bubbly drinks, and animal-skin wrapped processions. (Also part of historic Hogmanay celebrations, strangely enough. And don't get me started on the decorated herring in Dundee). Find a good looking dark-haired man to be the first over your door step after midnight, visit friends and bring them the traditional gifts of coal, shortbread, salt, black bun (a kind of fruitcake) and whiskey -- and play safely, kids.
Posted by tanita✿davis at 3:47 AM
Labels: Random Notes and Errata, Views, World o' Blogs

Happy New Year to you and yours, Tanita! And, careful on Hogmanay--things can get out of hand :)

Dundee was my town (well, Broughty Ferry...), but I have no idea what is up with the herring!

Me neither. Still -- it makes such a good story that I have to keep imagining it... a decorated herring, no less, danced through the torchlit procession...

As to the dark-haired man - I'll step out the door & back inside if it'll make you feel better. ;)

As to the Latin? Well, methinks that we should look a bit closer to home, to C.J. Cherryh to learn the language, really. She is, after all, a fabulous writer, which beats the other guy hands down! Really: he was motivated by somebody's pregnant belly-tattoo? Nah - Cherryh's got it.

I can't wait to see the Persepolis short film--the graphic novel (and its sequel) are both amazing. I read the first one in a class at Mills and was so glad I did.

Happy New Year, you two! 2007 was great because I got to meet both of you, and hope to see you again (somehow) in 2008. But either way, you help light up my day. Cheers and blessings!