Whenever I imagine that I will never manage to finish a novel, I think of what Libba Bray went through to finish her trilogy, and then I feel a little stronger. Even the best and highest profile writers have really bad days sometimes.

Via Squeetus Blog, Shannon Hale announces that she's going on a book tour with Libba Bray. What a fabulous idea! Though from two different houses (Bloomsbury and Random House), the authors' books are apparently targeted at basically the same crowd, so it made sense for them to tour together, in order to get the kind of audience they both deserve.

If nothing else, it means they won't sit at a book signing table all alone if no one comes!

Awhile back,via Mitali's Fire Escape, I learned of a "Expand Your Horizons" challenge started by Melissa at Book Nut. After realizing some of her own reading limitations, Melissa challenged readers to either read four books by authors in one of six categories (you can read more than one category, but you must read four books; not two books in one category and two in another) OR read six books, one from each of the six categories below. The categories are: 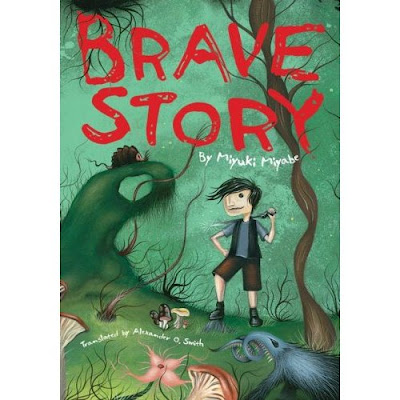 The Expanding Horizons Challenge will run January through April of 2008, and while I'm not entirely sure I'll have the time to jump into the whole thing with both feet -- revisions are calling -- I'm pleased to have completed my first book in the series. I've read Miyuki Miyabe's Brave Story -- all eight hundred sixteen pages which make up the two volumes. Stay tuned for my (post Cybils) review, and I hope that when the new year is over, you consider joining the challenge, too.
Posted by tanita✿davis at 12:40 PM
Labels: Book News, Views

I'm reading for this challenge, too -- nothing as big as Brave Story, though (I hope). Will you be reading more Asian/Asian-American books, or one from each category?

Awesome! I've long been a lurker here.. and I'm so glad you've decided to do this. (Especially since I think Mitali wasn't so thrilled about my idea.) Thanks for the shout out... (I know you're not officially signed up, but do you want me to throw your name in the pot for the start off prize pack?)

Hey Guys!
Honestly, I don't know where I'm going with this challenge. I know an editor at Viz Publishing, and was sent two Japanese translations -- both of them are awesome.

I'm not officially signed up 'cause I'm not exactly sure how many "international" authors I can get my hands on -- our library has books in original languages here in the UK -- makes my life interesting! -- but I'm enjoying seeing what I can find, and I certainly plan to give it a shot.

(Melissa, somehow I missed the bit about prizes!! I would do this without one - I know I don't read only Caucasian or even only African American authors, but this this is encouraging me to read translations and young adult lit from other nations -- a good stretch!)