It's only Grandma's Sewing Circle... right?

This Patricia A. McKillip story isn't exactly a YA novel, but the young, hip, protagonist will appeal to older YA readers. 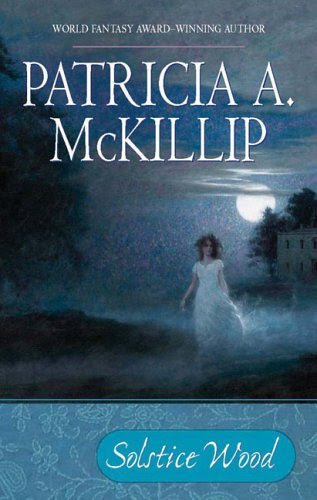 Sylvia is horribly sad that the only thing that can get her back home is her grandfather's death. She always hoped to be able to get back to the house where she grew up, where she was raised by the kindest people in the world, after her mother died, but she could never make her way back. She had her reasons, of course, and the distance was important -- vital, even, but no one would understand.

Big, hulking Lynn Hall is the same as it always was, and Sylvia is ...frankly, shocked. Isn't home supposed to look smaller when you've grown up and gone away? Shouldn't Solstice Wood, the copse of trees outside of her family home, look smaller, less... deep and threatening? And shouldn't her grandmother stop watching her like a hawk? After all, she's a grown woman now. What began as a terribly sad duty becomes a bewildering reunion, as her grandmother brings together her sewing circle to welcome her granddaughter home. The realization that it isn't simple stitching that her grandmother does chills her to the bone.

Sylvia has to figure out a way out of this mess -- before she's entirely hemmed in.
Posted by tanita✿davis at 5:49 PM
Labels: Crossover, Fantasy/Sci-Fi, Mystery, Reviews, Suspense