In the beginning, there were readers... 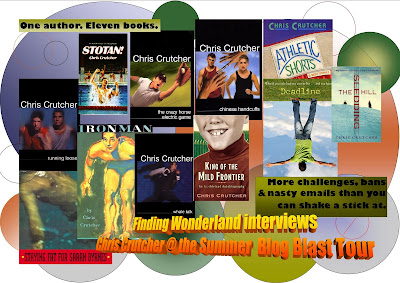 Some of them read, and were ecstatic, breathless, inspired. They said "Heck yeah!" a lot, and stabbed at the air with their fingers, and called people up to read them certain lines.

Some spent time snuffling and going back to pages marked with tissues. Quietly.
Some wished they had read long before.

(They hadn't read, of course. Just... guessed. X-ray eyes peering between book covers. Osmosis. Superpowers nobody else has.)

Love him or loathe him, the man's books inspire thought.
Join us tomorrow for the Chris Crutcher interview, Thursday, when the Summer Blog Blast continues!
Posted by tanita✿davis at 5:36 PM
Labels: Book News, Views