Meet Christie and Bethany—two young women who are making their own comic and hoping to market it at the Yatta Anime Convention. This is Christie's second year attending, and she not only encounters her idol, Lida, but also a whole array of unpredictable career obstacles, crazed fans, and the enigmatic but compelling Matt. In my review of Svetlana Chmakova's Dramacon Vol. 2 for our sister site Readers' Rants, I described it as "charming, funny, [and] surprisingly deep" with some really nice manga-style artwork.

Vol. 2 went on to become one of the final five in the Cybil Graphic Novel Awards 13-and-up category, but this is by no means the only honor that the Dramacon series has received. It was nominated for both a 2006 Harvey and a 2007 Eisner award, won the 2006 Mangacast Yomi award, made it on the 2005 list of Best Comics of 2005 by Publishers Weekly (who referred to it as "a little gem"), and was picked for YALSA's 2007 Great Graphic Novels for Teens list. 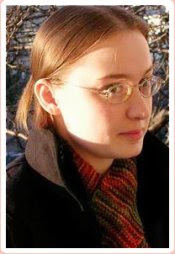 Still, Svetlana remains modest about her accomplishments, despite being quite prolific in the world of comics: she has drawn for manga art and tutorial books, RPG books, toy designs, animation, book covers, and web comics, besides penning Dramacon and, for a spell, the "Adventures of CG!" comic in CosmoGIRL! magazine. As manga grows in international popularity, it's less of a surprise--and we're glad about that!--that a Russian-born Canadian woman would be kicking so much butt in the traditionally male-dominated world of comics.

FW: The atmosphere and characters at the comics convention are vividly depicted, with a lot of detail and humor. Are there any autobiographical aspects of Dramacon? For instance, are the comic-con scenes or the fledgling writer/artist storylines drawn from your own experiences?


The book is entirely fictional and none of the characters are based on me or other real people. However, the environment and the spirit of the book are heavily inspired by my own experiences at cons, and by stories I've heard from my friends. In short, I tried to write the book as it may have happened. The fledging writer/artist story in Dramacon is fictional, too--unlike Christie and Bethany, I can both draw and write. (Or can't, depending on who you listen to, hee...) So my path was different, though it shares some of the basic elements (webcomic, peddling my art at cons, meeting awesome pros who took the time to say a few kind words about it).

FW: What do you see as the advantages of the graphic novel form for first-person narratives such as yours, which remains very closely in Christine's head as the story is told? 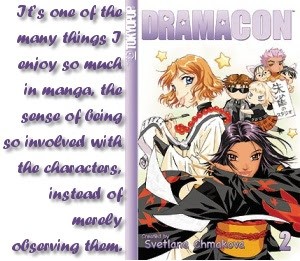 The advantage is exactly that--we get a chance to see the story through Christie's eyes and really be close to what she goes through. It's one of the many things I enjoy so much in manga, the sense of being so involved with the characters, instead of merely observing them. That being said, I probably will stay away from first-person narrative in my next series, Nightschool--I also like having the reader wonder about what’s going on in the protagonist's head. First-person narrative fit for Christie's character, since she is so open and wears her heart on her sleeve. Alex is... Quite different.

FW: Conversely, what have been some of the greatest challenges of this project?


All of it, frankly. Haha! Dramacon is my first full-length series and I'd never before written or drawn 160-180 page books. It was a big change from webcomics, to have to plan my story out completely instead of just feeling my way along and making it up as I go. It's a big challenge to stay on task, too. Creators are, by their nature, incurable slackers; getting yourself in gear and tackling the enormous work involved in producing that many pages of art and story is very difficult.

FW: We've noticed that Dramacon Vol. 3 is in the works. Is this going to stay a trilogy, or are you planning future installments?


The current story arc will finish with the third volume. There is much more story I would love to tell and there is a possibility of more volumes... But I am not sure when--my next series "Nightschool" has already been picked up by Yen Press and I will be starting work on that as soon as I am finished with the third volume of Dramacon.

FW: You use many visual elements characteristic of Japanese manga, such as chibis, the childlike depictions of characters used for humorous or expressive purposes. What aspect of manga do you find most appealing as a form, as a means of expression?


I couldn't possibly pick just one... I am still trying to figure out what exactly is it about manga that appeals to me so much, though chibies and manga's versatile visual vocabulary are probably at the very top. In a tie with the cinematic and up-close-and-personal way of storytelling. Second only to that would be the stylish b&w look of the inks and screentones, plus the unique and iconic approach to character design. The range of manga styles is truly staggering--the flexibility of that area of comics language, the way it adapts so wonderfully to the type of story it carries to the reader. I mean, in most cases you can immediately tell a shojo manga from a shonen manga just by the art/panel arrangement alone. How amazing is that?
/end love letter to manga

FW: Are you influenced by Japanese shojo manga, which is marketed specifically to girls? What types of manga have influenced you?


I am influenced by both shojo and shonen manga, as well as a fair bit of seinen and josei. The biggest manga influence on my own work were the creations of Rumiko Takahashi ("Ranma ½", "Mermaid Scar"), Fuyumi Soryo ("MARS"), and Kosuke Fujishima ("Ah! My Goddess", "You're Under Arrest!")


My major non-manga influences are Sailor Moon the animated TV series, Slayers, Star Trek: The Next Generation, Buffy The Vampire Slayer, and the work of Warren Ellis. Also, The Comic That Made Me Love Comics is ElfQuest, by Richard and Wendy Pini. I was too young a writer to be influenced by it, but it lit the fire, so to speak.


My favourite children’s/young adult books... Most of them are Russian, since that is where I grew up to be almost 16. English favourites include Harry Potter, Naruto, Full Metal Alchemist, The Chronicles of Pern series by Anne McCaffrey, the Earthsea series by Ursula Le Guin (does that count as young adult?...) and many more that I can't recall right now. I've always been a bookworm.

FW: How far back does your interest in comics and manga extend? When did you first start drawing comics? 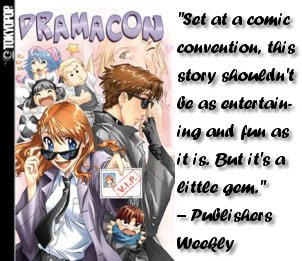 I've always drawn comics in some form, I just didn't realize it. I drew illustrations for the notes our family would leave for each other; I made up my own stories and drew illustrations for those, sometimes even in sequence. The book that really crystallized my yearning to make comics was ElfQuest, by Richard and Wendy Pini. I found the first issue (Russian translation) on a trip to Moscow, by chance, really. I read it until it started falling apart, I was so taken with it.


After my family came to Canada, I had better access to comics and to a much bigger variety of them. That's when I really started drawing sequential art in earnest and studying the medium. I attempted to hand in a comic for my independent study in creative writing class, hee hee... I didn't finish it, but I still have it somewhere.

FW: You contribute an ongoing comic to the magazine CosmoGIRL. How did you get involved in that, and what do you enjoy most about that project?


Actually, I might as well mention here that I am no longer with the project--the issue that is on the stands now (June/July) has my last comic for them. It was an absolutely wonderful project and I really enjoyed working with the magazine and playing with their characters. The best part about it was probably the creative challenge! Like the Dramacon book, the Adventures of CG! really made me grow--I found it difficult to write/draw a complete story in just one page, so managing to pull it off each time was immensely satisfying and taught me a lot. Also, I really loved the characters, especially Taylor.


How I got involved in the project initially--CosmoGIRL editors approached TOKYOPOP about re-imagining their comic strip as a manga and I was picked in a sort of art audition to be the person for that. The relationship worked out so well, I ended up doing it for 2 years.

FW: The "On the Set" and "Svetlana Makes a Manga" sections at the back of Dramacon provide readers with a glimpse into your working process, and are especially encouraging for aspiring young comics creators. What advice you would give to young women who are interested in breaking into comics writing or art?


Practice and study like fiends. There are no shortcuts in art--to be good, you need to put in the work hours. School is great and will give you much more than just an art education--it's an invaluable life and people experience, as well. Another excellent step to take would be to start a webcomic and see how you do with updates and if you can handle the grind of having to produce pages for a storyline. Anyone can get a few pages out, but few can do so on a regular basis AND keep up the quality. Also, webcomics are a great way to earn credibility, an audience and to get noticed by publishers--that's how it happened with me. I had two webcomics running (Chasing Rainbows on www.girlamatic.com and Night Silver on www.wirepop.com) and TOKYOPOP just wrote me one day out of the blue, saying that they saw my work and would like to work with me.


Also, don't lose heart if your work is not quite finding its audience just yet, and keep working on improving. I failed at getting comics work at 3 publishing houses before TOKYOPOP offered me a job, and I couldn’t give my comics away at cons back then. Looks like that was not an indication of my chances of success in the field! So far, anyway... *fingers crossed*


Happy writing and drawing! Make sure to enjoy it, that really is the main thing.

Great advice, and a wonderful interview! Our thanks to Svetlana for sharing her experiences as well as her enthusiasm, and don't forget to drop by her awesome website. Tune in tomorrow for a change of pace back to prose, when FW interviews the redoubtable Chris Crutcher, author of Whale Talk, Chinese Handcuffs, and a host of other gripping -- and often protested, challenged and banned -- YA novels.

Posted by Sarah Stevenson at 12:05 AM
Labels: AF, Interviews

I am so glad you guys brought up Svetlana's name. I don't follow manga that much and had completely missed her. I'm now very eager to go after her work - plus she was just so nice to correspond with. This interview is fantastic and I know it's going to bring her some new readers!

Yeah, thanks, ladies. I'm totally intrigued now, and am adding Dramacon to the TBR pile.

Thanks! With a few exceptions, I don't have extensive knowledge of manga myself, so it was fun and educational for me.