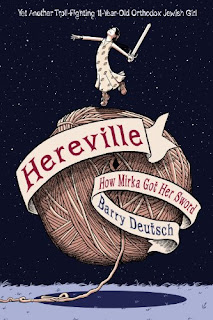 Hereville: How Mirka Got Her Sword was a finalist in this year's Cybils Awards for Elementary/Middle Grade Graphic Novels. A few words about Hereville from the author's Amazon bio: "After graduating PSU, Barry created Hereville, an online comic book about the magical adventures of an 11 year old girl, and the very religious Jewish community she lives in. The Webcomics Examiner declared Hereville one of 'the best webcomics of the year' shortly after Hereville's premiere, in 2004." Our own Betsy Bird of Fuse #8 called it "the best graphic novel of 2010 for kids. Bar none." Read her review for an in-depth look at this book, or check out the various viewpoints in the roundtable discussion on Good Comics for Kids.

Reader Gut Reaction: Why all the extra external info? Well, I have to admit, this wasn't one that had crossed my radar until the Cybils, so I decided to do a little research before writing up my review. But how could I not be drawn in by that tagline, "Yet another troll-fighting 11-year-old Orthodox Jewish girl"? It's a fabulous hook, and it was paired with wonderful, appealing cover art. And I was really excited to read a fantasy story set in an Orthodox Jewish community, which is a culture I have limited knowledge of. It sounded cute, unique, and bold.

And it was all of those things. I have to admit, though...I had a few mixed feelings about this one. I'm going to say right off that I didn't end up as wholeheartedly enthused as many reviewers were. That's not to say I didn't enjoy it. I absolutely did. It provides a fascinating glimpse into the lives of an Orthodox Jewish family—the day-to-day aspects as well as the celebrations and beliefs and strictures and everything else, and the fairy-tale adventure aspect was great, too. Who doesn't love a swashbuckling girl heroine? Also, the cartooning was very good, very solid and very polished—funny when it was supposed to be, and informative when it needed to be.

Having said that, I worried that this one might be a little limited in terms of kid appeal. To me, it felt a bit teach-y at times. I'm sure plenty of readers wouldn't be bothered by it, but for me, it got in the way of the story from time to time, when I felt as though I was being informed instead of entertained. But it's a good story, and I would be horrified should my opinion stand in the way of others' enjoyment of what is really a charming and appealing book in many ways.

Concerning Character: As a heroine, 11-year-old Mirka immediately hooked me. She's spunky, funny, and longs for adventure in a way that exasperates her devout family and well-behaved siblings. And when she finally finds her adventure in the form of a talking pig and some other unexpected obstacles, we find that she doesn't have to be foul-mouthed like the girl in Kick-Ass to, well, kick ass. (Not that I didn't love that movie.) The other characters—her brother and sister, and even the villians—were enjoyable, and I also liked the fact that the stepmother was not an evil fairy-tale stepmother but actually quite wonderful.

But: I couldn't help wondering, over and over, where's the dad? I know this takes place in an Orthodox community where the women's and men's worlds are quite separate, but as far as I know, you'd still see the men from your immediate family, right? It felt weird—something seemed missing to me. He only appeared a couple of times, almost in passing. What we see is the world of the women and children, and in a way, this is probably an underrepresented viewpoint, so in that sense I think it's a good choice. Still, it gave me pause.

Themes & Things: Adventure as a metaphor for learning to go forth into the world and rely on your own smarts and resources—a theme that is used to great effect in this book, and which is heightened by the fact of the story's setting in an Orthodox community, a place that is quiet and proper and decidedly non-adventuresome. At the same time, this isn't a story about rejecting where you come from; rather, it expresses the idea that where you come from can be a strength, even when you're trying to get away from it and do something far more exciting. The appreciation for family, for ritual, for propriety, and what happens when you are just a bit not-proper—all well conveyed.

You can find Hereville by Barry Deutsch at an independent bookstore near you!
Posted by Sarah Stevenson at 8:00 AM
Labels: AF, Fantasy/Sci-Fi, Graphic Novels, Middle Grade, Multicultural Fiction, Reviews

I LOVED Hereville and was very happy whent the author said its the start of a series. So now I am impatiently waiting on the next book.

Oh and I thought maybe the dad wasn't seen so much because he felt every day problems of the children should be dealt with by the mother. This first crossed my mind when I realized the dad remarried so quickly, and I couldn't help but wonder if he was looking for a wife or a mother for his kids.

Thanks for the review! I really appreciate it. I'm sorry that it came across as "teachy," since that's something I was trying to avoid. You might like book 2 better, when it comes out this November; since I figure a lot of readers have already read book 1, I spend less time explaining the culture in book 2.

Totty (aka Dad) isn't seen very much both for the reasons Doret suggests (thanks for your comment, Doret!). There's also a space issue -- I just don't have much room, and have to decide to focus on some characters at the expense of other characters. (It's killing me that poor Gittel, who I love -- that's the grumpy older sister -- barely appears in book 2.)

Book 2 continues that trend, but someday I'll do a book where Totty gets some real screentime! (I hope.)

Doret: That interpretation didn't occur to me when I was reading, but it definitely makes sense & is something I should have thought of. It's the same in traditional Islamic culture, too--I see that all the time on my dad's side of the family where the vast majority of the kids' day-to-day business is handled by the mom.

Barry: Thank you so much for stopping by! We're always honored when authors come by and comment on our reviews.

Let me reiterate that I KNOW others didn't see a teachy angle to this, and readers have very different opinions on what constitutes the right balance of information and entertainment for them. This is just one reviewer's individual opinion. :)

Re: Dad and girl-centrism, I love that this is a girl-focused story in a culture that may seem to outsiders to be very male-centric! And believe me, as a writer I HIGHLY sympathize with the space issue and having to minimize some characters in order to focus on others. Sigh...

Thanks again for your input!