It has to be every once in a great big blue moon that we'll do a middle grade review on this blog, mainly because AF, Citysmart Girl and I write YA lit and tend to limit our reading choices in that direction. However, CSG has two wee boys, and one who might enjoy discovering the Calvin Coconut books, so I thought I'd give this one a whirl. Plus, deep-sea fishing is big at AF's house!

Funny and full of Calvin's boundless energy - for anything except mowing the lawn or doing story problems - the book is a quick-paced read that will be a lit, like the rest of the series. Though this series is aimed at boys, there are female characters, and I think it can easily be enjoyed by everyone.

Reader Gut Reaction:There's something about author Graham Salisbury books which is appealing, regardless of the age he's writing for. His island-centric fiction, colorful characters, and little snapshots of a world where we'd all love to live is a good hook. His Calvin Coconut series has been ongoing for some time, and the title of this episode in Cal's life kind of hooked me, too. MAN TRIP. I laughed. Man trip? Calvin's a fourth grader!

Oh, well. Calvin's Mama always tells her he's the man of the house... which isn't really what Calvin wants to hear.

Concerning Character: Calvin is a well-drawn fourth grader - full of enthusiasms which do not include story problems or chores like mowing the lawn, or girls in general and Shayla, who sits next to him at school, in particular. He's a typical kid - not particularly bad, not particularly stellar, just ... a kid with his own concerns. He is, fortunately, surrounded by older people who are reasonable - His long-suffering mother, who does not screech when he leaves the lawn unmowed for days after she's requested his assistance with that chore, Mr. Purdey, an ex-Army man who is his teacher, the live-in exchange student, Stella. His mother's boyfriend, Ledward, a mountain of a man who owns a banana plantation, provides a non-intrusive male presence at home. It is Ledward who comes up with the idea to take Calvin on a man trip to the Big Island with his friend Baja Bill - just the three of them, getting away to clear their heads in a manly fashion. It is a deep-sea fishing trip that's going to change things for Calvin. 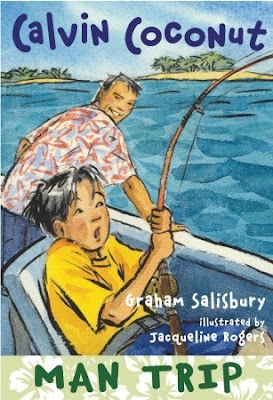 Recommended for Fans Of...: Bruce Coville, including books like Jeremy Thatcher, Dragon Hatcher, Gary Paulsen's books, including Lawn Boy, and Richard Peck's middle grade books including A Year Down Yonder, and Here Lies the Librarian.

Themes & Things: And this is where Graham Salisbury catches me: he writes books directed toward male readers which have strong thematic elements about basic issues of manhood... in short, how to be a man. Truthfulness, honorable behavior, responsibility, kindness - these are all covered in an oblique fashion which does not club readers over the head, but the issues are there, nonetheless. Calvin does thoughtless things, like running over toads with the lawn mower, or catching tiny fish, and leaving them on the bank for the mongoose to find -- or the ants. He's not deliberately destructive, but he doesn't think about the fact that tiny fish deserve to live. Through Ledward's example - being shown and not so much told - Calvin absorbs the idea of respect for the natural world. Ledward and Calvin's "man trip" bumps Calvin up the ladder toward being a man through unobtrusive leadership in a book which still manages to be fresh and funny and full of wonder. And exaggeration. And gross bits. And the odd nose picking. And a fairly pesky girl.

Cover Chatter: One fun thing that middle grade books have that YA books often don't? Interior artwork! Jacqueline Rogers does a fantastic job of creating active looking b/w sketches for the interior pages of the story, as well as an appealing cover which shows Calvin buckled in, front and center, having his big moment, wrestling his ono into the boat. Fun stuff.

You can find CALVIN COCONUT: MAN TRIP by Graham Salisbury after March 13 at an independent bookstore near you!
Posted by tanita✿davis at 2:12 AM
Labels: Guy Appeal, Middle Grade, Realistic Fiction, Reviews

I love that cover! And the book sounds cute, too. Maybe our friend's son in Hawaii, who is 7, will enjoy these in a couple of years...(In the meantime, maybe *I* will!)