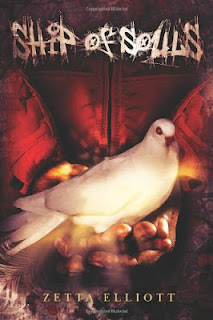 Reader Gut Reaction: I tend to think there needs to be more contemporary-setting fantasy for the middle grade/younger YA set—without vampires or werewolves, thank you very much—and I particularly like to see fantasy novels with multicultural characters in them. So I was excited to get the opportunity to read Zetta Elliott's Ship of Souls, which takes place in Brooklyn and includes a realistically diverse cast of characters. Brooklyn might not be the first place you'd think of when you think about urban fantasy, but add in a venerable old park, some ancient monuments, a mysterious bird-spirit, and a whole, er, boatload of restless ghosts, and you've got the setup for an intriguing ghostly adventure.

Concerning Character: Dmitri, or D, is a great narrator—he's a smart kid who's trying to muddle along and be strong in the wake of his mother's death, but that's hard to do when your world has turned upside down and you're living with a foster mother. Endearingly, he wants to do everything right, and he really is a good guy, but he still feels set apart from his classmates at his new school. The two new friends he makes couldn't be more different from one another—Hakeem is a Muslim basketball star D is tutoring in math, and Nyla is a worldly-wise, mouthy military brat who hangs out with the self-confessed "freaks". But they quickly forge a bond when they're drawn into D's adventure. I loved that both Hakeem and Nyla are as multicultural as you can get, from diverse families, but in a way that was still realistic rather than seeming forced. I also liked D's foster mother Mrs. Martin, although I kind of wished she'd had a bigger part somehow.

Recommended for Fans Of...: Fantasy that blends aspects of the contemporary and historical, like Susan Cooper's Dark Is Rising sequence, or historical fantasy with a lot of ghosts and cloak-and-dagger business like the Theodosia books by R.L. LaFevers.

Themes & Things: As I mentioned, this book had plenty of fantastical adventure, even Goonies-style crawling through underground passages. In fact, I couldn't help wishing that more time had been spent on the fantastical plot elements. The aspect of this novel that dealt with the developing friendship between D, Hakeem, and Nyla was particularly strong and really nicely done, but I occasionally felt a little lost or rushed along when it came to the fantasy action. What really shone, though, was the idea that D comes to learn that he isn't alone, and that the bonds of friendship and family can appear in unexpected forms and places.

Authorial Asides: The author is a faithful fellow blogger--go check out Fledgling.

You can find Ship of Souls by Zetta Elliott at an independent bookstore near you!
Posted by Sarah Stevenson at 8:00 AM
Labels: Adventure, AF, Fantasy/Sci-Fi, Guy Appeal, Middle Grade, Multicultural Fiction, Reviews

Wow. I have to check this out! I love the premise!

This has a lot of unexpected elements - I love that. Sounds intriguing.