CREEPY. I think that's the word we're looking for here. WEIRD, dark, disturbing, with a Gothic feel. Those are the words that came to mind as I read this book. Andrea J. Buchanan, with the help of Open Road Media, has created an experience - an ebook, book trailers, original composed music, and a graphic novel. This is a project I can see appealing to young adults to read - and to create for themselves.

Reader Gut Reaction: I'm not really into ghost stories, as such. I am, however, one who can give kudos to a really creepy premise, and I think this will elicit goosebumps for tween readers, if not for others who don't do hardcore horror.

As is often the case in YA novels, the adults who could be told are either keeping secrets of their own, disinterested, or unavailable. The one adult who knew that something was going on was discredited dramatically. The one quibble I had with the novel was that at the conclusion, one character took the fall for everything - and then exits, stage left, and no one mourns her. She has fallen victim to the ghost's schemes, as do most of the other main characters, and yet she's the only one who doesn't get away with it?

Concerning Character: Daisy is ...normal. Relentlessly so, at least on the surface. She's average and nice enough, but doesn't attract attention. She avoids too much entanglement with other students, because she tends to zap them. Static electricity, and sometimes stronger electrical disruptions - seem to flow from her body. She kills any technology she touches - it's just how it goes. No iPhone, no MP3 player. No computer. A wind-up alarm clock. This is Daisy's world, and she's always trying to hold it together, because getting out of control might mean blowing it all up - or blowing it out, anyway. There was this incident at her last school...

Daisy has one good friend, one teacher she really likes, and... that's pretty much her life. She lives alone with her mother in a technology-starved manufactured home (we can't really call it a trailer if it doesn't roll). She has Secrets, and feels no one can ever really know her. 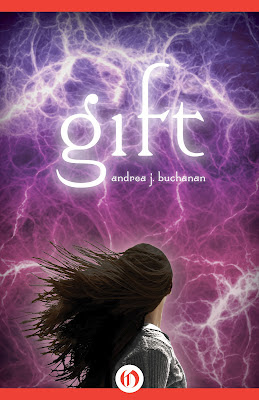 Daisy's best friend, Danielle, knows Daisy's secret, and actually has kept it - which occasionally surprises Daisy. As a character, Danielle is only lightly sketched - she's a little edgy, a little brash and impatient with Daisy's tech-free world, and a little sarcastic. We know that her mother keeps a fairly tight rein on her. Later, we are told her secrets - secrets she was unwilling for anyone to find out.

And then, there's Vivi - the odd girl out. While she sails confidently through the halls, she's utterly disconnected from everyone. To Daisy she seems self-possessed, and then... she discovers how little of Vivi's self is really left. She's absolutely positive that Daisy is supposed to be something to her -- something which will be revealed in time. Vivi is completely baffling, wafting through the halls at school with a secret smile, talking to ...herself... Daisy both worries for her, and is utterly freaked out by her; Danielle finds her repellent.

Vivi is also a less dimensional character, but most readers won't mind; her mother thinks she's possessed, she's been suicidal, she's the stereotypical Troubled Girl everyone has heard about.

It doesn't make sense that these three are friends - except, they have to be. Vivi's imaginary friend, Patrick, said they're all connected... but who takes their orders from a ghost?

Recommended for Fans Of...: Breathe, and other ghost stories by master-spooker Cliff McNish, Look for me by Moonlight, by Mary Downing Hahn, the works of Vivian Vande Velde, and the Nightworld series by L.J. Smith. Lovers of lush, over-the-top, creepy, Gothic tales will enjoy this light, quick read.

Themes & Things: This book is more atmosphere than anything else, but the lightly touched on theme might be simply stated as - Use what you have, don't let it use you. That's pretty much the same message of Star Wars, really. Use the Force, don't go to the dark side. Or something like that.

Cover Chatter: Since this book is only in digital form, the cover doesn't seem to be as important - and yet, care has been taken that it matches the storyline well - all the lovely electrical currents crawling all over, and Daisy's hair standing on end works beautifully. The graphic novel included in the book is illustrated by Alexis Seabrook, and the music -- yes, there's music! -- is by Fredrik Larsson, a Swedish musician who will probably be signing in record deals soon. Altogether, this is a really engaging package, and makes the story a full experience.

FTC, this ARC came from NetGalley; my opinions are my own.

You can find GIFT by Andrea J. Buchanan at Amazon, B&N, Google Books, Kobo, and Overdrive, or you can find the audio version, complete with four original songs plus the narration from these same sources. It's also available on iTunes, where you get the complete package with text effects and everything.
Posted by tanita✿davis at 4:08 AM
Labels: Fantasy/Sci-Fi, Graphic Novels, Reviews

It's also available on iTunes, where you get the complete package with text effects and everything!!