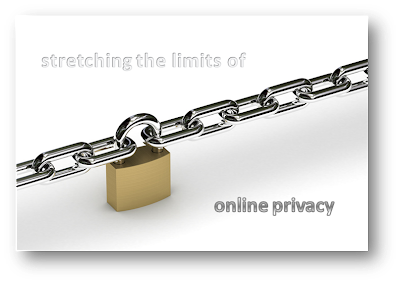 Like many in the blogosphere, I often get videos from TED talks passed to me. I love TED stuff - conversations, since 1984, about the best in Technology, Entertainment, and Design. In some ways, I'm a little torn about their role - I think the conferences are ridiculously elitist, in that it's so prohibitively expensive to attend them that only the über rich do, and in that way sort of create themselves (dominant culture, male, AND the 1%) as the leaders in the field of "spreading ideas." On the other hand, I appreciate that TED invites thinkers to speak to them from every field and also that they always encapsulate the messages the thinkers present via free and easily accessible video media, worldwide. So, there's that.

Because Tech Boy's doctoral dissertation is on information management and media, I'm familiar with Sherry Turkle, author and director of MIT's initiative on Technology & Self. What she said about privacy struck chords with me - big, ringing chords, like tolling bells.

From NPR's All Tech Considered:

"We like to say that we grew up with the Internet, thus we think that the Internet is all grown up. But it's not. The problem is that we have not created a privacy culture on the Internet that we can live with. We created the wrong one. What I think about is: What is intimacy without privacy? What is a democracy without privacy? We weren't asking those two questions when this was created and we bequeathed to our children this culture then we shrug, 'they don't care about privacy.'

"I was trained to care about privacy. My grandmother of Eastern European descent used to marvel at the mail. The idea that you were in a country where mail was sacrosanct... that to tamper with the mail was a federal offense, to her, this was one of the great things about being an American. What drives me crazy is that people turn to these babies, these children and say, 'They don't care about privacy.' But it was our responsibility to teach them.

"[Facebook CEO] ]Mark Zuckerberg says privacy is no longer a social norm. When he said that, I tweeted — and I never tweet, that's how angry I was — it may not be relevant for the social network, but it is for intimacy and democracy. Technology makes people stupid. It can blind you to what your underlying values are and need to be. Are we really willing to give away our Constitutional and civil liberties that we fought so hard for? People shed blood for this, to not live in a surveillance society. We looked at the Stasi and said, 'That's not us.' And now we let Apple do it and Google do it? For what?"

Turkles message resonates with me because I'm old enough to have been taught voting by "secret ballot." In many ways, the political ...contagion brought about by media saturation and social, wherein we now know what everyone else thinks about everything, is kind of scary to me - I was raised believing that political stuff, like religion, was a matter of intense personal belief, and thus deeply private. In many ways, I still view myself as an educator, so these things matter to me, on behalf of the teens with whom I interact, and on behalf of myself. Who do we want to be, as writers and bloggers and people, online? Who do we want to be seen as? Or, does that no longer matter, since it seems that we're seen whatever we do? Is there any going back from the edge of this cliff??

Talk amongst yourselves.
Posted by tanita✿davis at 3:43 AM
Labels: Soapbox, Weekend Word

I have 2 lines of thought on this.

The first is: Yes, people don't care about privacy anymore, and that's why we have built the world we have. We've ceded our civil liberties and our privacies with barely a murmur.

The second is: No, I'm not so sure it was a conscious decision. I don't think the average teen posting online about her romantic adventures or the wild party she went to has any idea how that might affect her college admissions, future relationships, or employability. I don't think the average parent posting pics of his kids online has any idea who all might get those pictures and how they might be used. I don't think people are making informed decisions when a company buries its privacy policies in pages and pages of jargon and changes them without notice. I don't think we really know how all our info is being collected, stored, and used.

But then again, whenever a few clues come out about the degree of info-collecting that goes on both for government surveillance and commercial reasons, there still doesn't seem to be a huge public outcry. So I go back to my first view, that maybe people don't care.

But then I think, people don't care because there haven't been enough nasty consequences yet. When people start losing jobs, getting arrested, and being otherwise affected in large numbers, they will value their privacy much more.

On the other hand, I've seen a huge change in how people treat phone calls. You used to go in a separate room and shut the door to take a call; it was considered rude to eavesdrop on a call. Now people take calls anytime, anywhere, shouting their private business into the phone, heedless of who overhears. So again, maybe we've decided that privacy is no longer important to us.

I may blog about this myself!