The first thing you need to know: this novel is out on April 3rd. That's just twenty days from now, so you have time to put your house in order before it sucks you in, and you lose an entire afternoon.

Secondly, we've interviewed the author, Robin LaFevers (AKA "Fabulous LaFevers), here at Wonderland before, and consider her a friend of the blog. This doesn't mean it's not an honest review, but that we're maybe a tad... giddy in our adjectival usage. Pay no attention to the squeeing, jumping-up-and-down bloggers, all right?

This review is a skotch early, so just think of it in terms of a preview.

Reader Gut Reaction: The writing never gets in the way of the story. That was my initial thought. Somehow, Robin writes, and you lose her author's voice entirely. It's like a voiceover in a film - it drops away, and there you are, in the action. I heard the priest mumbling, saw the ugly smile on Ismae's stepfather's face, smelled the clammy, damp earth in the blackness of the root cellar, and felt the fierce exultation when she figured out her true purpose, as one of St. Mortain's... The convent is satisfying, and has elements of parochial school that bring a smile. The friendships are believable, and the romance builds upon itself in such a way that when it finally catches fire, its sizzle is worth the wait.

Concerning Character: Seventeen-year-old Ismae has lived in the shadows, for her whole life. The daughter of a turnip farmer and his downtrodden wife, her life has been a series of beatings and cowering on the edges of things. Her scarred back is not attractive, but less attractive is the fear she engenders - and the rage in her father and the other men of the village. At least her mother didn't use any excuse to beat her, or throw things. Now that Ismae's mother has died, marriage mightbe an escape from her father, but it turns out to be a deadlier trap than Ismae believed. With the unlikely aid of a priest and an herbwitch, Ismae is spirited away to the convent of St. Mortain -- the convent where she will learn to be a Handmaiden of Death -- an assassin.

It's not easy, completing all of the learning and work that is before her, but Ismae is confident that her life's work -- and her life's worth -- is tied up in watching to see the marque Death places upon the guilty, and being the knife in the dark - or the garotte or subtle poison - come at just the right time. She is no longer one of the sheep, but a true wolf in sheep's clothing - innocent, unassuming young woman, demure and coy, her wrist circled in a fine gold bracelet -- which just so happens to turn into a garotte. Death's Handmaiden, through the advanced information of the seer at the convent, is always right -- always. Ismae's place as Death's daughter is to obey, and to act.

Except, action is not always straightforward - and waiting on will of gods is frustratingly slow, when the wrongs before her are so very clear! One strike, and she can right wrongs, restore balances, and clear the way for how things should be. A daughter of Death surely knows what her father-god desires, doesn't she? Unfortunately, life and death -- and finally, love -- turn out to be much more complicated than Ismae could have possibly dreamed. 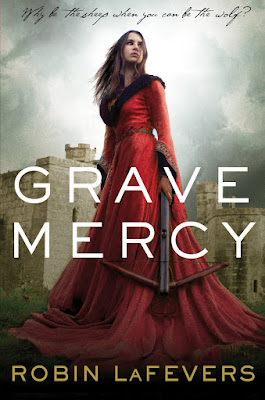 Recommended for Fans Of...: Well, people have said this would appeal to fans of Graceling, by Kirsten Cashore, so I'll let that stand. Also for fans of the Victorian spy-girl novels of Y.S. Lee, of Megan Whalen Turner's Attolia books, of Elizabeth Bunce's Starcrossed/Thief Errant novels, Maria V. Snyder's Poison Study novels -- a lot like that, with well written and tense scenes of danger and desire -- and, to add something random, some fans of Michelle Jaffe's Bad Kitty series will probably like this, too. Just because.

Themes & Things: An unusual theme in an assassin novel is body image, but that's what we have going on here - Ismae is deeply ashamed of the mark that covers her, a "deep red stain that runs from my left shoulder down to my right hip, a trail left by the herbwitch's poison" -- the evidence that her mother took poison to abort her. This mark signals that she is one of Death's children, as the children of Death are disturbingly hard to kill. As Ismae grows in strength during her training, she begins to see her body differently - and eventually take not just pride but pleasure in it.

Further themes are to do with ethics -- again, a surprise, as we're already killing with the blessing of a god, so why quibble? -- revenge, loyalty, and independence. Without giving more away, these themes support an organically unfolding sense of each character, and supports believable plot progression as we discover more of who they are, how they think, and how they will react to the rolls of fortune's wheel.

Cover Chatter: (As usual, click to embiggen the cover.)

That's one hefty wee crossbow, there. And one big old dress. Who can shoot in that thing?? Well, Ismae, for one. Though many covers have no bearing whatsoever on the story inside of them, this whole dress-crossbow scene is actually in the book. Woot!

Both castle and crossbow - and embroidered gown sleeves - successfully invoke the book's era of 15th century Brittany, and create a powerful image for this historical romance.


Authorial Asides: This novel has a star from Publishers' Weekly, a star from Booklist, and a star from Kirkus... which must have felt extremely good to this author. Congratulations, Robin, you have so earned this. ☺

An intelligent novel with a gripping premise, a tautly woven web of tension and desire, a memorable romantic entanglement, and a satisfying conclusion. It's too early to talk beach reads, but I'd wager this one will be a great one for Spring Break. FTC TAKE NOTE: It's thanks to NetGalley for providing the ARC; my opinions are, as always, my own.

And it's coming soon - APRIL 3rd! You can find GRAVE MERCY by Robin LaFevers at an independent bookstore near you!
Posted by tanita✿davis at 3:10 AM
Labels: Adventure, Fantasy/Sci-Fi, Reviews, Romance, Suspense

This one is tops on my to be read list!! Can't wait.

Even though I tend to steer clear of girls in pretty period dresses, this one looks great, and I am looking forward to it lots! Especially since it seems to make sense that she's in a period dress.

@ Charlotte - Oh, ME TOO. I just saw a cover for a new paperback coming out - a floofy dress and a girl ON A HORSE. REALLY? The Historically Foofy Dress things is huge, and always gives me pause because it so rarely matches the storyline. But! In this case, for real - she's wearing a dress she hates, and is given a whomping big crossbow to defeat her enemies. It's fun.

I think I may need to preorder it. Seriously, I look forward to having the time to just take a day and sit there, on the couch, buried in a book. Soon...soon...