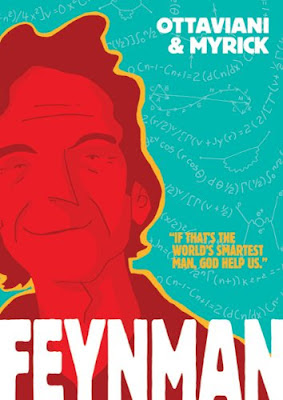 We don't usually review nonfiction here on FW, but I like to make the occasional exception for an outstanding graphic novel—because, naturally, even a biography or a memoir has to present a good STORY for it to hold the reader's attention. Feynman, which was a finalist in this year's Cybils Awards for YA Graphic Novels, does that and more.

Reader Gut Reaction: Richard Feynman was not only a physicist but a larger-than-life character in many respects, whose voice lives on in numerous writings and recordings and whose charisma alone has inspired generations of would-be scientists. That would seem to make him a great choice for the subject of a graphic novel, and with a few qualifications, I think this was accomplished with Ottaviani and Myrick's Feynman.

Yes, the chronology was a little confusing at times, flipping back and forth in time, but for the most part this wasn't an issue. Also, not everyone will gravitate toward the subject matter, and there are some lengthy portions that concentrate rather intensely on math and physics. However, readers with an interest in science and/or biography, or at least those who are open to reading about a real character (in both senses of the term), will enjoy it quite a bit. It has a great visual style, with a loose, indie-comics feel that makes it stand out from the crowd. I also see this as having a large adult crossover audience.

Concerning Character: It's so easy to say the word "genius," but surely it's not as easy to depict one. I really liked how this one portrayed the humanness of a great scientific figure, showing him in his quiet moments, with his family, not hiding his foibles. It's a fascinating way to bring Feynman's speeches and anecdotes to life, and it doesn't talk down to readers—rather, it assumes readers will want to learn about the physics as well as about the man, and by doing so it succeeds in giving us a fuller picture of what was really going through his head. I also thought the authors did an admirable job of showing Feynman's wife; though she's not the focus, she was an important figure in his working and non-working life. 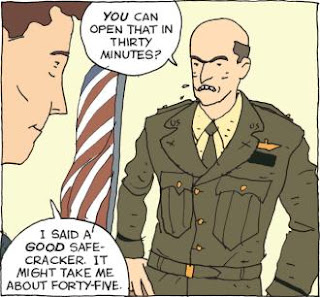 Recommended for Fans Of...: Graphic memoirs that take place against a specific cultural and historical backdrop, like Persepolis by Marjane Satrapi; fans of biography, especially scientists' biographies; and particularly recommended for those who liked The Watchmen and want to know more about the real history of the development of the atomic bomb.

Themes & Things: Theme and character are almost impossible to separate in this one, but besides the biographical aspects, this one's also fascinating in terms of history—the history of science, of course, but also the history of how science and politics became bound up together, for better or for worse, during the nascent nuclear age. There is also a strong underlying thread that concerns the history of women and science—we see Feynman's wife serve as a sounding board for his ideas; and we see his sister, discouraged by everyone around her EXCEPT him, from her interest in science, but who nevertheless goes on to be quite accomplished and learned herself. This is definitely a must-read for science enthusiasts, whether you're a layperson or an expert.

You can find Feynman by Leland Myrick and Jim Ottaviani at an independent bookstore near you!
Posted by Sarah Stevenson at 8:00 AM
Labels: AF, Graphic Novels, Nonfiction, Reviews