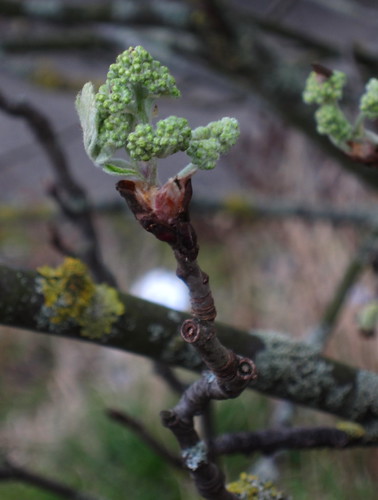 Despite the fact that the trees are practically being leveled by the wind, or there's slush blowing sideways, or there's ankle-deep rain where you live - by the calendar, at least, the vernal equinox begins today, flower children. Spread your roots and get ready for those petals to unfurl...

March Madness has gotten a great jumpstart in the poetry field. I go daily and vote and read and ...just wonder. I am startled at how many poets I know (for a given value of 'know,' meaning lurking at their blogs and meeting them maybe once in person). There are a tremendous number of talented people working with children and working with words, and it gives me a big happy. Plus: the whole thing is crazy fun. There are some random words being handed out, and some on-the-spot poets making up poetry to go along with them. It doesn't always succeed as well as they might expect, but more often than not, it doesn't fail. Which is simply astounding. Thanks to the brain of Ed DeCaria - or, possibly, his alter ego, Charles Mund - for coming up with the tremendous idea, putting in so much work for the polls and scoreboards, and just for making it fun.

Meanwhile, every weekend Tech Boy and I make a point of sitting down and watching Crash Course for our little knowledge nugget. I've already mentioned John Green doing the amazing Crash Course History, but I'm loving Hank Green's Crash Course in biology - and laughing because the first video Tech Boy said, "Wait. Isn't that the same guy?" Er, no. And clearly, Hank needs to do a section on genetics and why brothers look alike. And sound alike. And occasionally do things alike, like, you know, teach people via Youtube. Also, Tech Boy needs to get out more. Anyway.

If you're like AF and I, you grew up playing boardgames - endless games of Monopoly and Scrabble, LIFE, and Risk. If you're like AF and Tech Boy, you took those board games one step further and played role player games that allowed you to tell stories and create new worlds from your imagination. If you grew up with games, I think you'll be interested to hear about Tabletop.

Produced by Geek & Sundry - an amazingly funny group of people creating amusingly eccentric media (if you've watched the webseries The Guild, you're familiar with the main masterminds) - Tabletop, which premiers on April 2, is hosted by the one and only Wil Wheaton, who is Wesley Crusher with a beard and a real life. I'm totally going to watch it, because a.) they got Grant Imahara to play with them, and he'd probably be fun to watch just doing his shopping, much less playing a game where he might LOSE and b.) they play Settlers of Catalan. I have heard much about this game.

Other offerings on Geek & Sundry look to be just as cool, including bringing Dark Horse Comics to life with "motion graphics," and a SFF bookclub podcast-turned-video show called "Swords & Lasers". And, of course, The Guild.

While I'm talking webseries, I want to point you to Unintentionally Awesome, a show about a girl who, because her fabulous, glamorous sister is Going To Be An Actress, must move away from all she's known. She enrolls in a new high school and almost immediately runs afoul of a nasty Mean Girl, and her completely clueless - but occasionally amusingly sharp -- Mini Me sidekick. Mallory makes a friend - a fellow geek - and together they weather the usual trials and ironies of high school. And yes, that wide-eyed little geeklet you see trailing after the popular Mean Girl? Why, she does look familiar - because she's Little Willow who blogs at Bildungsroman. Unintentionally Awesome has been accepted into the Hollyweb Festival, screening March 31st at Dim Mak Studios in Hollywood, so fingers crossed that there will be more episodes...

We're graphic novel aficionados around these parts, and are excited to discover a new serial comic online. Bad Machinery, by John Allison was recently given props by Hark, A Vagrant!'s Kate Beaton as a series to watch, and she's right - it's really worth the time. For me, it's hilarious because it features a group of tweens living in Manchester, and has a lot of similarities to the community I observed in Glasgow. I'm eager to get my hands on a copy of Murder, She Writes, John Allison's first (I think) graphic novel on the series, but until then, there are tons of episodes online of the teens solving mysteries. Hilariously WEIRD mysteries. The author kindly organizes them with a "newbies start here" kind of order, so you don't miss anything. It's good fun.

So, there you have it - maybe not much sun yet, but some reasons to smile anyway this first day of Spring.
Posted by tanita✿davis at 1:48 AM
Labels: Happenings, Random Notes and Errata

I am so behind on things I want to watch. I keep meaning to watch some of the Crash Courses (my BFF's been watching them, and she says they're really good, and she is a history teacher, so there's that), but first I must, must, must watch Unintentionally Awesome.

This weekend, maybe, I'll get some quiet watching time when the weather gets cold and rainy again.

I am SO going to have to check out Tabletop. And these Crash Courses sound intriguing--this is the first I've heard of them, but then, you know I've been in a cave for a few months. :) Plus, since our house is currently filled with Teaching Company Great Courses (speaking of crash courses) if any more education sneaks in anywhere the universe might implode.

I'm so excited for LW and Unintentionally Awesome! I can't wait to get some time to watch those. I did see a trailer.

Ben just discovered the Crash Courses last week, and has been spending his spring vacation educating himself therewith!

And Yay for Spring! (I guess. I don't have time for it yet...but maybe next week!)

Thanks, ladies! I hope you enjoy Unintentionally Awesome.

I'm flattered to be mentioned in the same post as Felicia Day/Geek & Sundry/The Guild, and the Vlogbrothers/Nerdfighters!