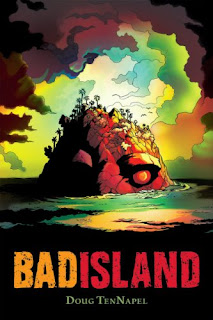 Doug TenNapel, who the increasingly aged among us may remember as the creator of the video game character Earthworm Jim, has written several graphic novels by now, which have gotten quite a bit of positive buzz; however, Bad Island is the first one of his that I've read so far. It was a finalist in this year's Cybils Awards for YA Graphic Novels, and this isn't the first time he's had that honor—last year his GN Ghostopolis was also a YA GN finalist.

Reader Gut Reaction: Who doesn't love a story about being shipwrecked and solving the mystery of a weird desert island full of fantastical plants and bizarre creatures? It's like Indiana Jones, but this one's got a few interesting, creative, and unexpected twists to the underlying premise. Although this one seems to skew to a slightly younger YA (or even older MG) audience, that adventuresome setup is pretty appealing to any reader with a love of action and fantasy. This is definitely a plot-driven piece, with two nicely structured parallel stories: one that takes place on a strange planet in an unknown time and place, and one that follows Reese and his disastrous family boat outing.

I really enjoyed the graphic storytelling in this one, particularly the use of color to set a mood, and establish a different atmosphere between the two storylines. The way the panels are laid out and the action is portrayed has a classic comics feel to it and makes everything easy to read. Style-wise, it's a nice blend of funny, scary, and fantastical. 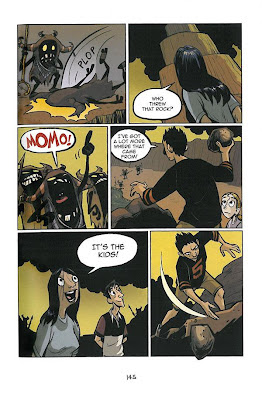 Concerning Character: As I mentioned, this one is more plot driven, but all of the characters, including the parents, were fully rounded, and each of the four family members played a relatively even role in the story, though it's arguably teenage son Reese's adventure. The dialogue was well-written and entertaining, and distinct for each of the characters. Without giving away too much of the plot, the alien characters, too, were distinctive, fun, sympathetic when appropriate, and scary when they needed to be.

Recommended for Fans Of...: Stories that blend fantasy, sci-fi, and adventure, like Kazu Kibuishi's Amulet books; also, fans of TV shows like Lost or Terra Nova, in which humans must use their wits to survive in an alien and sometimes hostile environment.

Themes & Things: Bad Island is loaded with themes appropriate to an adventure story and a shipwrecked-on-an-island-with-your-aggravating-family-possibly-forever story: most notably, though, it's a story of forgiveness, courage, and trust.

You can find Bad Island by Doug TenNapel at an independent bookstore near you!
Posted by Sarah Stevenson at 8:00 AM
Labels: Adventure, AF, Fantasy/Sci-Fi, Graphic Novels, Guy Appeal, Reviews