There's a smell, when old books have congregated in a room for a long while - the dust of the ages, scented with bits of memory - perfumes, soaps, perspiration, exhalation from the reader. The homey smells of glue and fabric stretched over heavy board, the odd leather binding, cracked with age, the slightly yellowed, rough-edged pages of an old book with watermarked pages... and the idea that there are within treasures and hoards of stories one hasn't yet read.

How could I resist a novel set in a bookstore? A mysterious novel, at that?

Reader Gut Reaction: I finished this book easily, but I struggle to describe it. The three distinct storylines woven through it are of O helping her aunt out physically - through the agonies of angina and her physical neglect of both her home and the bookshop. The second thread is Emily's memories of a scary childhood event with an überscary Magician, and the third thread is the present-tense business of the bookshop, which at first seems straightforward - buying a load of first editions from a wealthy family moving away - a coup that might just keep her aunt in business. However, tangled with the books is a mystery which deepens and darkens, and has drawn both aunt and niece into something they never suspect -- until it is well too late.

The threads are not always evenly woven; readers of less "quiet" books might be frustrated by the enigmatic nature of the text. The novel is atmospheric and slow-paced, giving plenty of space for Emily's love of poets, poetry, and the written word to influence the reader. The intergenerational relationship between a teen and an elderly woman create a summer which Kirkus called "transformative" for O.

Concerning Character: O - who loathes the name Ophelia and the madness of Hamlet's namesake ladyfriend - is a quirky character. She is almost less of a person than a collection of ...opinions. The author indicates that she's an atypical teen in a number of ways -- there is an "incident" on an airplane that's referred to but never explained, but the upshot is that O does not fly. She does not do any number of things that "ordinary" teens are meant to do, and inasmuch as her father is worried about the health of his eccentric poet older sister, he seems worried in equal parts about his daughter. The chance to send them to each other seems nothing less than fortunate. O herself dislikes quirkiness as she finds it in herself, and fears eccentricity -- she believes her aunt is short a few bricks. She worries that she, too, is losing her mind - and this makes her more believable and sympathetic. Sure, she sees crazy people everywhere, but at least she knows the truth: if it's them, it's her, too.

Meanwhile, Emily, O's aunt, seems to be ...beyond eccentric. For one thing, she seems quite frail, and O fears she is losing her grip -- at first. When her mind wanders to spooky, creepy things that have happened in the past, the reader wonders, "Really?!" and then feels a sense of impending doom... whatever IT was, it is surely coming again. Eek. When she and O are at last in step with their suspicions and fears, the author uses atmosphere to truly Gothic effect - some well placed shivers.

An ephemeral homeless boy -- or is he homeless? Or a real boy? Emily's poet friends, and the others who wander in and out of the scene set in the bookstore come and go, mere background to mainly what's going on in the character's heads.

Between the haunting characters in the bookshop, a moment of time travel, and a boy who flits in and out of O's life, the book left quite a few ends dangling - unfinished. I was shocked to discover that it's a sequel, so perhaps the author intends to tie up loose ends in another novel? An unfortunate choice, as a final chapter might have allowed the climax to feel a bit less rushed, and would have given us a better sense of closure. 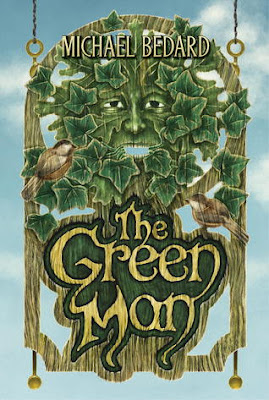 Recommended for Fans Of...: Oddly enough, the Hilary McKay books come to mind when I think of this book - the slowness of the pacing, the eccentricity of the family, and the satisfying intersection of adults and their art. This book might also appeal to those who like slow and beautiful books, like the works of Eva Ibbotson, and readers of William Blake may also enjoy the imagery and evocative turns of phrase.

Cover Chattter: The beautifully carved wooden sign that hangs above the bookshop both interests and unnerves O - and the cover of the novel which depicts a green man goes well with the novel. According to Wikipedia, that font of all knowledge, "the Green Man is often related to natural vegetative deities springing up in different cultures throughout the ages. Primarily it is interpreted as a symbol of rebirth, or "renaissance," representing the cycle of growth each spring," which fits in with the idea of this as a transformative novel. An excellent cover choice for the type of book, I think.

FTC/FCC, This ARC comes from NetGalley; my opinions are unsolicited and are my own.

After April 10, you can find THE GREEN MAN by Michael Bedard at an independent bookstore near you!
Posted by tanita✿davis at 5:00 AM
Labels: Fantasy/Sci-Fi, Magical Realism, Reviews

Me! Me! I feel sure this will appeal to ME! thanks for this review - can't wait.

You had me at "bookstore."

I don't know if it's worth starting with the first book, but this stood alone well for me.