Many of the books I read are new - we have contacts with publishers who want us to talk up things that are recent releases. Those are fine. But, we also have our trusty library cards, and I for one love to talk about earlier releases which catch my eye and which I find on my own. (I like old books, and I cannot lie - though this one is not really even "old," per se...) While this novel was marketed as a fairytale for adults, it is a perfectly attractive and intriguing novel for teens, and I think this is one which many will enjoy.

I don't even remember who told me about this book anymore. Probably Charlotte, since I learn of all of the really cool old books from her... except, this one doesn't include time travel. Hm. Well, whomever suggested this one, thank-you. It was eminently readable in the way the historical fantasies like Hilari Bell's or Lawrence Watt-Evans are -- totally immersing and the world-building was believable and fantastic.

Reader Gut Reaction: This novel's blend of non-magical and magical was so well done that when the magic came, it felt... fairly mundane. SUMMERS reads like historical fiction, and the novel is a period piece that shows all the ins and outs and backstabbing that happens in royal political families. It follows the life of a young girl who saw just what was in front of her - beautiful, shiny people that she had the privilege to spend time with each summer, and their glorious captive alioras. It's a gradual story of how a life changes, bit by bit - how each summer at the castle produces changes - and what always stays the same.

Concerning Character: Coriel's father was a Lord, despite her mother being merely a wise woman and green witch. Her death during Coriel's early childhood leaves Coriel her grandmother's apprentice, and she has learned herblore from the time she was tiny. Coriel believes she will be serving a village of her own as wise woman someday. She is serious about her studies - very serious. And then, in a fairytale move, a great man comes. It is her uncle, Lord Jaxon, who informs her that her father has died, but that because Jaxon promised his brother that his daughter should be introduced to life at court, Coriel is to be taken away to summer at Castle Auburn and learn to know her half-sister.

We enter the story when Coriel is fourteen. Her half-sister Elisandra is engaged - to a prince, which thrills Coriel no end, especially because Prince Bryan is beautiful and charming, and everyone loves him. Coriel looks forward to her glittering summers most because of the aliora, the beautiful, fey creatures Jaxon captures for use in the castle. They are almost human - they cannot abide the bite of metal, and just being in their presence is calming and centering, and brings everyone great joy. Coriel is allowed to go on a hunt for aliora once and is delighted just to be out with her uncle and the prince and all the men. Her life circles around her love for her sister, and her absolute slack-jawed adoration of Prince Bryan. The prince's cousin, Lord Kentley, becomes a good friend, indeed, Coriel finds friends everywhere. Even the guardsmen are fun and congenial companions. For the first few summers at least, life is good.

Gradually, as Coriel ages, people seem to ...change. Her uncle doesn't seem as happy as she thought him to be. The prince's regent, Lord Kent's father, seems to look at her speculatively a great deal. Elisandra seems to wear serenity over any true emotion, and Prince Bryan has changed -- he is paranoid that someone is going to kill him, is brittle and brash and drinks too much. One of the guardsmen is behaving oddly - and Coriel finds herself with a niggling and confusing envy she cannot shake at the alliances and entanglements among the royals - and she often has to remind herself of who she is, and how lowborn she will always remain.

When Uncle Jaxon brings a new aliora to the castle - a very young one - Coriel can't get the image of her cringing beauty out of her mind. What if Coriel were that child herself, ripped from her magical homeland and her family's arms and brought to be sold to strangers?

Suddenly, the summers aren't quite so bright at Castle Auburn. 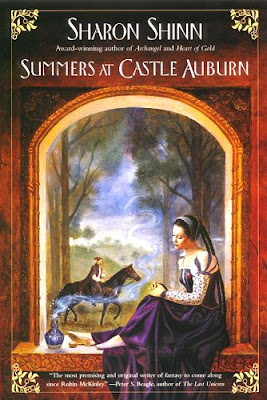 Recommended for Fans Of...: Ever, Fairest and Two Princesses of Bamarre, by Gail Carson Levine, plus the novels of Robin McKinley, Hilari Bell, and the Ethshar novels of Lawrence Watt-Evans.

Themes & Things: This novel is clearly a bildungsroman, exploring the way we see the world that is full of the same things, from one moment in our lives to the next as we age. Also there are issues of slavery and freedom, of love and obsession which are darker and more involved that they appear on the surface. (When any of us love, are we really free, whether we are in chains or no?)

Cover Chatter: Though the color palette is not especially bright or arresting, and the picture of the young girl with a Lordly looking dude in the background on a horse has a sort of long-ago murky museum portrait quality, as far as fantasy novels marketed to adults go, this cover is not bad. (Boy, that's damned with faint praise, isn't it? Let me rephrase: it's not particularly engaging, but it's still not a headless female, a female torso, or a girl in a ridiculously huge dress with an earnestly constipated expression.) Repackaged with brighter, stronger colors and more emphasis on Coriel's green witchery, this title would surely sell to younger readers.

You can find SUMMERS AT CASTLE AUBURN by Sharon Shinn at an independent bookstore near you!
Posted by tanita✿davis at 7:49 AM
Labels: Fantasy/Sci-Fi, Reviews, Sibling Fiction, Sisters

On the cover: I think I like the image a lot, but not so much the font of the title and author, which look sort of Dragonlance-ish to me.

This one sounds good. You know I loves me some Robin McKinley.