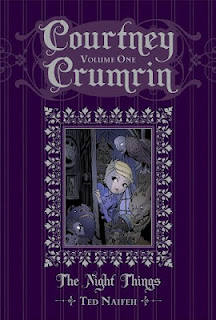 Courtney Crumrin, Vol. 1: The Night Things, Special Edition, a fantasy adventure by Ted Naifeh, was recently sent to me in galley form by Oni Press. This special color edition re-release of the original title (which I'm now reading for the first time) is available next month.

Reader Gut Reaction: Anyone who likes the over-the-top Gothic atmosphere and dark, mordant humor of Lemony Snicket's A Series of Unfortunate Events will want to check out this first volume in what promises to be a series packed with somewhat hyperbolic but entertaining magical misadventures. Courtney Crumrin's rather vapidly social-climbing parents have moved her out to rich Uncle Aloysius's creepy old house in a posh suburb full of mean rich kids, but Courtney is soon to find out that her uncle's quite a bit more than just an eccentric old dude...

The visual feel for this one is sort of a blend between traditional comics (reminds me just a little of some of the '90s Sandman art) and a more informal, fun, cartoon-y, funny-papers style. Anyway, it works, and the extra covers and concept art at the end were enjoyable.

Concerning Character: Courtney is set up to be the heroine who's a fish out of water in both her family and her new neighborhood, but she isn't by any means insipid—she's got sass, even a little bit of attitude, and is determined to survive. The peripheral characters, for the most part (including her parents) are a bit exaggerated for humorous purposes, but Uncle Aloysius gets fleshed out into a rather intriguing and even sympathetic character. As a reader, it was satisfying to watch the development of their relationship.

Recommended for Fans Of...: Anyone who was a fan of the Lemony Snicket series and wants to move on to something intended for a slightly older audience would probably enjoy this one. Fans of magical or paranormal-type fantasy with a lot of humor, like Anya's Ghost (reviewed here) or Friends With Boys (reviewed here), both of which also happen to be stories about being new in school.

Themes & Things: As I mentioned, the development of the relationship between Courtney and Uncle Aloysius was the most satisfying thematic thread for me—it gave the story added stability as it veered in and out of silliness and even satire. And, of course, the idea of being new and not fitting in at school is always a classic theme; in this case, Courtney has good reason to not fit in, and what's more, she really wouldn't WANT to, even if she could. So this story's got the added plus of sending the message that you don't have to conform to be happy.

You can find Courtney Crumrin, Vol. 1: The Night Things, Special Edition by Ted Naifeh at an independent bookstore near you!
Posted by Sarah Stevenson at 8:00 AM
Labels: AF, Fantasy/Sci-Fi, Graphic Novels, Humor

Wow. I am putting this on my wish list immediately. I'm always in the market for good graphic novels.