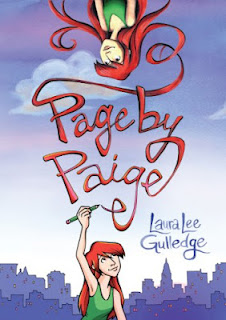 Page by Paige was a finalist in this year's Cybils Awards for YA Graphic Novels. Check out the author's blog for a sneak peek at her next YA graphic novel.

Reader Gut Reaction: The new kid in school. We've all been there, whether it's because we moved from one town to another, or by virtue of starting a new stage in our education: middle school, high school, college. For Paige Turner, she's also moving from Virginia to the big city of New York, and as a quiet artistic type, she's worried about fitting in, about finding friends, and about finding herself. So she keeps track of her roiling feelings in a sketchbook/journal.

Teen readers, particularly girls, with an artistic/intellectual side will probably gravitate towards this one. Not only that, the visual encapsulations of her feelings and the sketchbook-as-journal will feel very familiar for a lot of teen readers, who will relate to Paige's troubles in expressing—and moving past—her feelings. I thought the visual aspects of this one were outstanding, both artistically and conceptually, and did a great job of communicating both the story and the more pensive, in-her-head nature of the protagonist.

Fun Fact: In case you were rolling your eyes at the fact that the narrator was named "Paige Turner" by her writer parents, my husband IN ACTUAL FACT had a student one semester—an art student, even—named Paige Turner. Really. Not making it up. 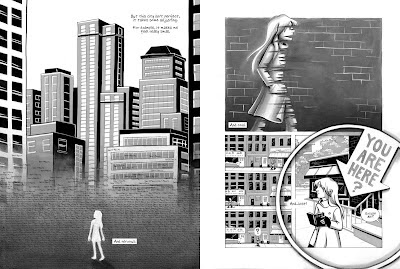 Concerning Character: Paige's introspectiveness, her self-doubt, will be immediately recognizable and relatable to many readers. By the same token, her stubbornness and willingness to try to be herself were inspiring, and the results hopeful and satisfying. Paige's parents are fleshed out as people, not just cardboard cutouts, and the artist grandma was a cute idea for a mentor, although in some ways her advice seemed a bit convenient. Paige's friends were all appealing and quirky, from her best friend Diana back in Virginia to her diverse and motley group of comic-reading, music-loving new friends in NYC. And how much do I love the fact that they're self-described ethnic mutts?

Recommended for Fans Of...: Stories about being new in school, or even new in town, which there seem to be plenty of right now in graphic novel format, happily: Friends With Boys by Faith Erin Hicks is a good one (reviewed here), as is Americus by MK Reed (reviewed here) and any of Hope Larson's books. Also, stories with artist characters like The Plain Janes by Cecil Castellucci (reviewed here).

Themes & Things: The story of being the new kid in school is, of course, a classic theme. However, I really liked the aspect of the story that deals with creativity, self-examination, and learning to let yourself be YOU, foibles and all; and the emphasis on the fact that true friends will forgive you your faults and boo-boos. I even think that part could have been developed more, though it probably didn't quite fit in the scope of the book. Still, I couldn't help wondering more about the context of the story—where did Jules and her friends fit in at their school, in a larger sense? Were they misfits? Well-liked? I suppose in a way the point is that it doesn't matter how they fit in at school because they're comfortable in their own skin and with one another...and they're helping Paige learn to feel comfortable, too.

You can find Page by Paige by Laura Lee Gulledge at an independent bookstore near you!
Posted by Sarah Stevenson at 1:47 PM
Labels: AF, Graphic Novels, Realistic Fiction, Reviews