TURNING PAGES: Shadows on the Moon, by Zoë Marriott

When I first reviewed a Marriott book in 2009, I found a satisfying, well-paced adventure with a warrior-woman protagonist in DAUGHTER OF FLAMES. Fast forward years later, and seeing Zoë Marriott's name with a whisper of familiarity, and I delved eagerly into this new novel. I was glad I did. A complicated story which frustrated me sometimes, Shadows on the Moon nevertheless delivered on the Zoë Marriott Guarantee - a well-paced, satisfying adventure, filled with detail, led by a strong female with a survivor's spirit.

And now, to the story.

Reader Gut Reaction: I was surprised by the setting of the story - somewhere in Asia, I thought at first. There was a great deal of detail but it was nothing I could determine as belonging to one Asian country or another. The endnote reveals the truth: the story is set in Tsuki no Hikari no Kuni, or, The Moonlit Land, which is embroidered, whole cloth, from the writer's imagination. For an unreal landscape, it has a number of very real elements - instruments, hair ornaments, buildings, styles of court, and social hierarchy. The research that must have gone into this -- and the note-taking to keep Marriott on track must have been phenomenal. 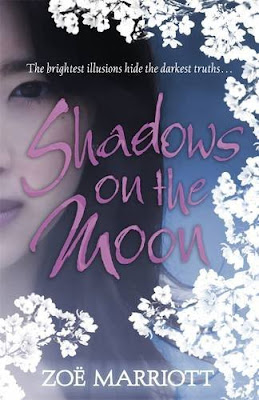 Concerning Character: This novel is touted as being "Cinderella set in feudal Japan." Fortunately, nothing so simplistic comes to mind after a close reading. Suzume is a little spoiled - an only child of noble birth, but she is learning to grow up and be better. Later, in her incarnation as Rin, her capacity for swallowing her the pain of the past, and putting on a serene face becomes even more ingrained. As Yue, she puts on a mask - of her true self - and her gift imbued with that self leaves everyone stunned. Who is this girl, really? And of what is she capable? That's the question which Suzume asks for the whole of the novel. When the strong foundation of her character is tested, she bends, but she doesn't break. Though the bend almost becomes a permanent blemish, she straightens, she strengthens, and she wins.

Recommended for Fans Of...: Ash, by Malinda Lo, Ella Enchanted, by Gail Carson Levine, Trickster's Queen, by Tamora Pierce, and other fab novels with strong female characters who manage to save themselves. 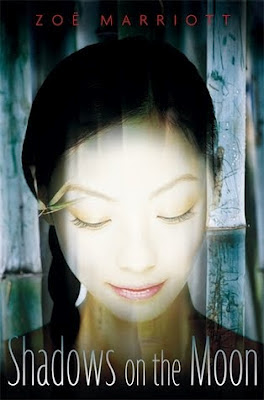 Themes & Things: This novel is packed full -- full! -- of thematic subject matter. There are cultural issues, mother-daughter issues, greed and avarice, themes of identity and self-harm. There are themes of social hierarchy, gender differences, injustice and revenge. And then there's the romance... I feared at first that this book was so issue-laden that we would lose sight of the character and her elemental desire, but though the details were numerous, the novel was never out of control. While at times I felt a question asked here or there would have thinned down some of the angst to a dull roar, at the pivotal moment, when it really mattered, all of the issues, noise, and drama fell away. The greatest theme of all is choosing happiness; if we don't learn to achieve happiness as we go along, we can at least decide to grab it when we realize what it is.

Cover Chatter: Pluses for both covers include an Asian model. Minuses for both novels include a face on a cover - I really have come to prefer an object. However, both novels use elements of flora and fauna to represent Asian culture and the main character. I rather like the British cover better, which came out in 2011 over here. The pale circle of the face of the model from the American version makes her look a bit washed-out and ethereal -- and see-through, but I suspect the book designer attempted to deliberately tried to make her look like the moon. I prefer the healthy sliver of face which appears on the British novel, and the masses of cherry blossoms, which are often repeated within the novel. The typeface choice is interesting, and appears in pale pink, deep pink, and black. On the American version, the bamboo backdrop and meekly lowered eyes seem unnecessarily "Asian-esque mystique," and stereotypical.

Authorial Asides: Last autumn this British author did a little writing week at The Book Memoirs. Well worth reading for tips on process.

NB, FCC/FTC: This ARC was a courtesy of NetGalley; my views are my own.

After April 24, you can find SHADOWS ON THE MOON by Zoë Marriott at an independent bookstore near you!
Posted by tanita✿davis at 6:52 AM
Labels: Fantasy/Sci-Fi, Magical Realism, Multicultural Fiction, Realistic Fiction, Reviews

Thanks for reminding me of this one--I've been wanting it since the UK edition came out, and it sounds even better now!

Ooh! This one sounds interesting.

I agree about the font on the UK cover--much less generic-looking.

This one really was fun - I enjoyed it and hope you guys do get your hands on a copy.