Wicked Cool Overlooked Books: Betsy Byars and the Summer of YA

The book, by the time I read it, was probably eleven years old. There had been reams of other YA novels printed, awards awarded, and the author had gone on to many other things.

You have to understand how it was, though. Books -- fiction books -- were for me the rarest gold. I grew up without fairytales, without science fiction (with the notable exception of the original Star Trek reruns on TV. When we were allowed to watch TV.), and certainly without a concept of fiction directed towards my age group. Unless it was a Reader's Digest Condensed Book, or a sort of Guidepost/Chicken Soup/missionary story, I had to find it at school. Of course, at school, there was tons of great non-fiction (Molly Pitcher: Girl Patriot,
copyright 1952 was a favorite), but I never had as much time for curling up and reading plain old stories - wildly fictional, partially true, entirely ridiculous - as I wanted. So, it was with considerable jealousy that I regarded my cousin, Dee Dee.

Three years younger than me, and the girl had everything. I remember it was at a family function -- there were radio-controlled cars, lots of relatives talking and laughing, and the kids all underfoot. I was bored, and eeled my way under a low closet rail in my cousin's gaping closet, where I sat, hidden, and cranky. I looked around at the surfeit of ...frippery that had exploded everywhere, and I found, on the floor, bent and discarded, a paperback book. 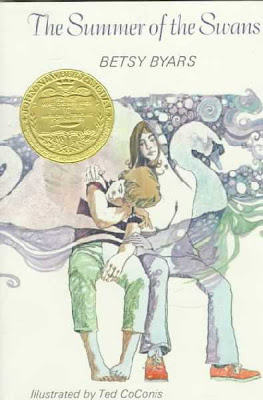 It was short. It had a yellowy-greenish sticker on it, which I ignored, and the cover had a picture of a girl, and a little boy, and a massive bird which arched up like a bridge behind them. I opened to the first page, and read.

Somewhere in West Virginia, there was a girl with orange sneakers who hated her ugly this-is-what-we-can-afford shoes, and thought her dad hated her: just like me. I was almost ten.

I considered stealing that book. My father bellowed up the stairs for me, and I had only read the first few chapters. Sara Godfrey's hair wasn't looking good, but something worse was going on -- Charlie thought he'd heard the swans, and had left the house to go after them. Charlie was "retarded," which is the word the book used. I was worried sick, and it was time to go. Indecision! I stood with the book in my hand, and my cousin bounced in.

"Is this your book?" I asked her faintly, trying to summon a feeling of apology.

"Oh, Mom bought that. You want it? You can have it," she said with the cheerful disregard of someone whose mother bought them books all the time. (This is not to say my mother did not. We just didn't have money for books. We went to the library, and were steered toward non-fiction... and Snoopy, God bless him. I think I've read every Peanuts book that exists.)

I probably should have double-checked with an adult, but that wasn't going to happen. I tucked it under my shirt, into my waistband, crossed my arms, and went home. I fell in love with Betsy Byars and The Summer of the Swans. I read that paperback until it disintegrated.

"A picture came into her mind of the laughing, curly-headed man with the broken tooth in the photograph album, and she suddenly saw life as a series of huge, uneven steps, and she saw herself on the steps, standing motionless in her prison shirt, and she had just taken an enormous step up out of the shadows, and she was standing, waiting, and there were other steps in front of her, so that she could go as high as the sky, and she saw Charlie on a flight of small difficult steps, and her father down at the bottom of some steps, just sitting and not trying to go further. She saw everyone she knew on those blinding white steps, and for a moment everything was clearer than it had ever been."

The Newberry Project describes the book's illustrations and references as a little dated, but the story itself as "timeless." And yes - that yellowy green "sticker" was the Newberry Medal, which I disregarded entirely. This book was the very first YA novel I ever read -- and there were many years after in which I dutifully read what well-meaning and ennobling, character-building, intelligence-expanding, and perfectly good nonfiction that was put before me (and it was perfectly good, and I enjoyed it... but you always want what you are told you can't have, don't you?), but this was -- the first feast that led to me sniffing after other book crumbs, other 'truths' that existed devoid of the rigid structure of fact.

What was your first? Do you remember?

Wow! What a great review! I haven't read it but you sure make me want to.

I don't know for sure the first YA book I read but I do recall falling hard for "The Forgotten Door" by Alexander Key. We read an excerpt in class (3rd grade maybe?) and I actually went looking for the full book in the school library (we had it!). After that it was "A Wrinkle in Time" and then I was gone in Madeleine L'Engle world. All good stuff, and all magical.

My parents let us check out whatever we wanted from the library - they never even checked! I always knew we were lucky but reading your post reminds me just how lucky...

This is so good. I was right there with you, upstairs in the closet, clutching the book. Thank God it found you.

My first YA that I fell in love with and felt was mine was Enchantress From the Stars, by Sylvia Louise Engdahl. There were other books before that, read to me, and that I read, but that was the first one that I felt I discovered on my own, and that made me feel like a grownup. You make me want to blog about it...maybe when I get home.

Thanks so much for this. It made my day to hear this story, and reminds me of why I want to write.

That was so beautiful. Thank you so much for writing it.

One of the first books I remember discovering on my own, and being completely blown away by, was Bridge to Terabithia. I think it was the first book that ever made me cry.

I think "A Wrinkle in Time" was definitely an early one for me--I know my mom passed me some well-worn copies of the whole trilogy when I was about nine or ten, and I went on to read almost everything she ever wrote for YAs. Judy Blume showed up pretty early, too--first her middle-grade books, then "Are You There God? It's Me, Margaret" and "Forever." Boy, what a great question...I'll have to think about this some more! I was lucky to have an English teacher and avid reader for a mom, so I had more suggested reading material than I knew what to do with...