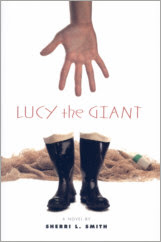 I first picked up the book because the cover was bizarre. It was white, plain, sort of ...spare. A huge hand, a net, and a massive pair of boots dominated the cover, and the word 'giant' was used.

Sometimes that's all it takes.

What was a whimsical choice in my 'lightning round' at the library turned out to be one of my very favorite books of all time, ever ever.

Big, tall, fifteen-year-old Lucy Otswego's struggle to cast a longer shadow than her father's reputation as a mean fall-down drunk in their town is more than she can take. Lucy's father hardly looks at her or speaks to her, because she looks like her mother -- who left them. Adults who've seen Joe's fast right hook pity Lucy, her classmates mock her, and she's on a first-name basis with every bartender in town...

All of them. Because after Joe's benders, Lucy's the one they call to carry him home.

When Joe's world destroys the one thing Lucy loves, she takes off, sloughing off her past like an unwanted coat. Mistaken for someone much older due to her size, she ends up with what she needs: a place to stay, and a job... but it's a job that's dangerous and rough, and she makes mistakes -- and an enemy -- right away. Things could be so, so good, if only this wasn't just a dream world. Lucy's in way, way, way over her head. But there's no way to stop...

Young readers discussed Lucy the Giant on Book Club of the Air for Young Adults, on LA 36, an Arts & Culture channel. Students in the book club said the book reminded them of a fairytale, correctly identifying the underlying structure of the Hero's Journey in the tale. When author Sherri L. Smith actually drops in on their discussion, the girls eagerly pepper her with their questions on craft and discuss Smith's take on Lucy. "Do you find it hard to be mean to your characters?" one of them asks. (Take a listen: her response will make you laugh.) Smith is genial, open, and funny, making herself a delightful guest.

More important that her wittiness, Sherri Smith is a.) not a giant, b.) not an Alaskan Native [i.e., Inuit, Tlingit, First Nations Alaskan peoples] c.) nor a crabbing expert, which speaks well, again, of the power of imagination. Anyone can tell another's story: the trick is to tell it well, and Sherri L. Smith has that down to a science.

Lucy the Giant was translated into Dutch in 2004, and under the title Lucy XXL, won an honorable mention at De Gouden Zoen, or Golden Kiss Awards, which was a tremendous honor for an American book by a first-time author. 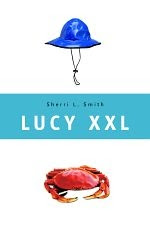 "An awesome first novel," I said when I first reviewed Lucy the Giant back in 2005, impressed at the research and imagination the author used to create an almost tangible Alaska for Lucy's world. It turns out that Sherri L. Smith has also written an awesome second novel set, in part, in pre-Katrina New Orleans, with all of the subtle and specific details in place. The novel is titled Sparrow, published July 2006, and was recently nominated as a Louisiana Young Reader's Choice Award.

Kendall has lived with G'ma for years, ever since her entire family was killed in a freak car accident. Family takes care of family is the golden rule in G'ma's world; but once G'ma's gone, Kendall has only an aunt left, one she doesn't remember, who didn't even come to the funeral. Kendall is seventeen, has ten days to find a guardian to sign the lease on her apartment, and nothing to lose. She heads for New Orleans, and her Aunt Janet, since even if you've never really met them, family's got to take family in... right?

Fans can look forward to another treat when Sherri L. Smith's Hot, Sour, Salty, Sweet debuts in February. A multicultural family and one shot at coming together with all ethnicities entwined to make a celebratory meal and impress a boy -- sounds like a foodie novel after my own heart!

Sherri L. Smith's books use a captivating first-person to drop readers right into the emotional center of her novels. Pick one up -- like me, you truly won't be disappointed.


Tomorrow's excellent Under Radar Reads include... 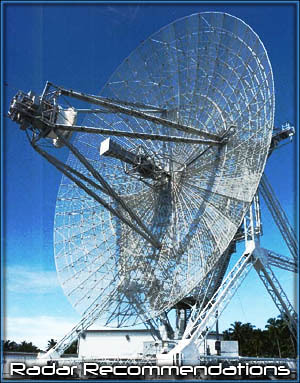 A Chair, A Fireplace & A Tea Cozy talking over Friends for Life and Life Without Friends, companion books continuing with the author celebration for Ellen Emerson White,

Shaken & Stirred presents: The Changeover and Catalogue of the Universe, both by Margaret Mahy,

Big A, little a shares an interview with Helen Dunmore!

Fuse Number 8 is getting loud with The Noisy Counting Book by Susan Schade,

And Writing and Ruminating wraps up the day with a novel in poems that broke my heart in a good way, Hugging the Rock, by Susan Taylor Brown.

The party's not yet over. Tune in for one more day!
Posted by tanita✿davis at 12:19 AM
Labels: Reviews, Under Radar Reading Recommendations

TadMack: This book does look, indeed, awesome! Thanks for the rec.

I'm loving these RADAR recommendations, because nearly all of them were, truly, under my radar :)

"Anyone can tell another's story: the trick is to tell it well, and Sherri L. Smith has that down to a science."

TadMack, I love that line. Another great review.

Thanks for the mention! Erin's interview is at
http://misserinmarie.blogspot.com/2007/08/under-radar-erec-rex.html
(The link in this post leads to Powell's books!)
Hope you all like the book!
You can let me know your thoughts - kazakingsley@fuse.net
http://www.erecrex.com/

Thanks for the link, Kaza! Great interview with Erin.