Toon Thursday: It's All About the B.I.C. 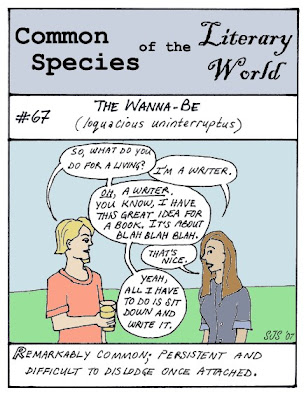 Man, I got this one up in record time. I may have missed Thursday anywhere that observes Greenwich Mean Time or later, but in the U.S. of A.--contiguous and non-contiguous--I'm still doing great. Then again, I am procrastinating about the revision of my last three YA novel chapters. The main problem is that I think I have to completely gut and rewrite the last chapter. The ending, people!! ARGH!!! The thought of rewriting the ending is seriously making me ill. Not because I so love the current ending, but because of the mental effort involved, and my desire to make it perfect. So I think I'll procrastinate just a little more, and go back to designing a poster for a local production of Pig Farm...Yup, that's the ticket.

But before I do, here's a Most Egregious Misuse I saw yesterday on my way to the post office. In the window of a Perko's diner I saw a sign reading "Ham and Egg's Breakfast $3.99" or some such terrible misuse of an apostrophe. Grr.

Oooh, I think I've had several of these. And yeah... the 'difficult to dislodge' bit? Too, too true...

Congratulations on the Pig Farm gig!

And I'm feeling your pain on the ending, but, like those first three-to four paragraphs, if it isn't right... it ruins everything...

Ah, Perko's. Clogging the arteries and the brains of this fair state, one diner at a time...