There are plenty of good reasons for Vegemite. I mean, other than the fact that it's a fine example of nutritive recycling -- Vegemite is made out of leftover brewer's yeast, which is a by-product of brewing beer -- it's also über vitamin-healthy, and if you don't count the sodium (or use scant amounts), it's über-healthy all 'round. It inspires 'roses in every cheek' I am told (though the child looks a bit feverish to me), and is an all around favorite Australian snack. 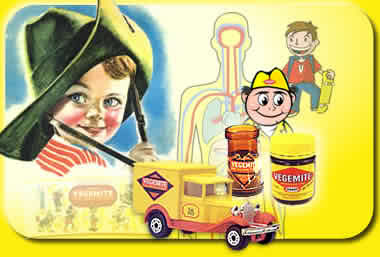 We here at Finding Wonderland salute the wonder that is Vegemite, and offer you just a few more reasons why it is so, so awesome and so book-friendly:

5.) It's not jam.
Jam sandwiches, which seem to work so well for British characters, tend to leak. Librarians? They no like the sticky books. Jam: book unfriendly. Vegemite: somewhat book friendlier (though unidentified brown smudges in books make librarians also quite uneasy. Just... be neat, okay?).

4.) It's not as attractive to ants.
Okay, Australia is often called Oz, for its completely otherworldly weirdness factor, which is quite high. For instance: have you seen the ants in Oz?! Do you want to see the ants in Oz? Wouldn't you just hate to be carried off by huge, six-legged, venomous, jam-sucking insects whilst you were innocently reading? Sure, some ants will eat Vegemite. But some ants... will eat anything. 'Nough said.

3.) It's a spread made for sharing.
Vegemite anagrams to 'meet give.' Meet. Give. It's the international symbol of friendship!

1.) And the number one reason why Vegemite is so awesome is that it's the rich goo that will glue together authors as diverse as Barry Jonsberg, the nuanced Margo Lanagan, Alyssa Brugman, Tasmanian resident Penni Russon and newcomer Randa Abdel-Fattah. It's part of the Australian history and culture which we'll celebrate kidlitosphere-style this week.

Best Read With Vegemite! Coming Wednesday to a blog near you.
Posted by tanita✿davis at 10:17 AM
Labels: Happenings, Views

Dude. Have you ever eaten Vegemite? It's disgusting. Really, really disgusting. And unbelievably salty.

But, Jackie darling. 'Course I've eaten Vegemite. I couldn't possibly list five stellar reasons why it is awesome without having eaten some.
All I've said is true:

And we're havin' a kidlit Vegemite event. All true.

Please note I did not mention recipes... my favorite ways to eat it... it does work well with tofu, but that's another entry for another blog altogether...

You are too fun!

I love it. Best. Ad. Ever. for tomorrow's event.

Okay, that person painting with Vegemite... on toast... is totally made of awesome.

What does it taste like, anyway? I sort of imagine it as something like vegetable stock paste, which... yeah, I wouldn't want to spread on bread.

Awesome, Tadmack. I love it. But, probably not enough to actually eat Vegemite (or jam, for that matter).

People, people!
Vegemite: not that bad.
Think of where you'd use something like soup stock or something like that in cooking. It's great in soups. I'm just not yet to the 'use on toast' stage, but it does work nicely as a cooking/stew base... or maybe for gravy...?

Vege-mighty good post, TadMack! In every way. Seriously, does Madison Avenue have your number?

Are you going to post a Vegemite cake recipe over at your other blog? :)

And no, Madison Avenue does not have my number. My dear, I was an English Major! I have no marketable skills!

Awww, come on, now - writing the text for the box of the commercially-sold vegemite tarts your SO ends up making? You know you've got those skills, baby! You could sell vegemite tarts, you know you could!