Readers familiar with Charlie Fletcher's STONEHEART trilogy will be unsurprised that his new novel, THE OVERSIGHT, is a crossover. Marketed to all general audiences, - i.e., adults - but enjoyable for everyone, this first book in the series has a gorgeous, evocative cover, and finely drawn tension. With plenty of clandestine meetings, worrying witch-hunters, showy tricksters, and terrifying pursuit, this adventure is densely detailed, with a fast-moving, portent-fueled pace and has just the right touch of the smoggy, impenetrable and dangerous backstreets-of-Victorian-London Dickensian feel.

Concerning Character: The Oversight are a Hand - that is, five people. They're all that's left of a vast, international organization whose job it is to support the Lore and the Law, and in whose care the magic of the world has been left. The Oversight are the judge and jury; they are the ones who stand on the line between the worlds of the magical and the ordinary, and make sure that All Is Well.

Or, rather, that is what they used to do. 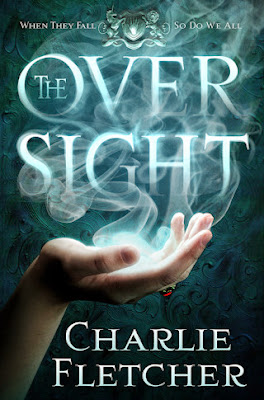 The Oversight used to have behind it the power of hundreds, and the Hand was once a fist attached to a mighty arm and a vast body -- but, not anymore. The Disaster took them down to only the last five in London -- others are in hiding, and still others are plotting against them. Their leader, Sara Falk, her guardian, Mr. Sharp, Cook, the Tinker, the Smith are all each other has -- holding onto the Treasures to which they've been entrusted - the keys to worlds, which, in the hands of their enemies, would unleash enormous trouble onto the mundane inhabitants of the world. But, there are just five of them -- and their strength has been negligible for far too long. Little things are getting away from them -- little monsters are creeping in, unnoticed, and the citizens of London are paying, and paying and paying... The Oversight are the last to hold the line... but the line is ... strained, and they're at the end of their rope.

But, who's to say when it's over? How can you tell when your day is done, and it's time to pack it in, hide the treasures, and let the war that is coming... come?

When a girl is brought to the Headquarters one evening, Sara, against all advice, decides it's not time to pack their bags just yet. This girl has talent - she might be one of them - and Sara Falk, acting head of the Oversight, is willing to hang everything on that fragile, thinnest of strands. But, her hopes may have been premature -- because, it turns out, the girl was a trap. In spite of all of their hopes, circumstances are out of control, far, far out of control. The end may be coming faster than anyone expected...and, when they fall, so do we all.

Critical Reader Reaction: As previously stated, this book is marketed for adults - but topically, there's nothing in this first book which wouldn't be perfectly appropriate reading for an older teen, say, a mature fifteen, or sixteen. The reason I say "mature" is because the sentence structure in this novel is aimed at readers - those who don't mind the occasional semicolon and who can parse out intent and nuance through context. While I wouldn't at all call the reading difficult, the author refuses to talk down to readers in any way. He indulges his love of language in a way that many British authors do by using whole language - perquisites, instead of "perks," for instance; the French word, horripilant, and words like noisome, and crepuscular -- these I just gathered from two random pages. These word choices cultivate an old-fashioned, 19th century feel which stays true to the novel and which I really appreciate. Bonus, Word Nerds!

Need a little taste? i09 has the first two chapters for you - but, be warned, my lambs, you read at your own peril; you'll be QUITE annoyed not to have the book on hand once you've finished. Better pre-order or get your name on your library's hold's queue.

I received a copy of this book courtesy Orbit Books. After May 6th, you can find THE OVERSIGHT by Charlie Fletcher online, or at an independent bookstore near you!