So, I sat down to prep for reviewing a book that I have coming from the library when I realized I'd never reviewed its predecessor... um, wait. How did that happen? As I recall, this book's release date was at a super busy time for both of us here, so it slipped through the cracks. We'll fix that right now!

Concerning Character: This is fantasy -- grand, high fantasy with the historical feel of ancient Korea. At first, in my head I was calling it "historical fantasy" but as we don't call Arthurian tales "historical fantasy," as if anyone believes that Arthur, Merlin et al were part of, say, real English history. *cough* Yes, arguably there may have been people named those names in reality, but the stories are... fantasy, right? So is this novel: high fantasy, set, instead of in an English countryside, in a Korean countryside. The weapons and armor say medieval Korea, and the novel is set during the Gojoseon era which as utterly fictional as the Arthurian era, but sounds as realistic.

We're introduced to our main character as she moves through the city. From the first few scenes there are fantastic and detailed explanationsof food, armor, clothing, people, and housing. We are also introduced to Gojoseon era myths and monsters -- and Kira, as one of its monster-slayers.

For all of Kira's life, there have been plots and counterplots to destroy the royal family, of which she is a member. When she was only a tiny child, Kira saved the crown prince Taejo, her cousin, from a monster. She's been impressive her whole life - impressively strong, impressively fast and fast-healing, and ...impressively weird. She's yellow-eyed, and a known slayer of demons. She can see them -- smell them -- find them like none other seen before, and she has a Tiger Spirit. Kira's different -- too different to easily and successfully fit into the royal family of Hansong or any of the Seven Kingdoms. A toughened soldier, Kira tends to be impatient with the Queen's attempts to drag her into pink, and she is horrified by an upcoming arranged marriage. It's almost a relief when its discovered that there's a traitor in the palace, and the Yamato's invade. It's almost a relief -- but not really. Taejo's bodyguard, Kira has no choice but to concentrate all of her wits on keeping him out of the hands of the enemy, leaving her mother behind and unprotected -- and the other ladies of the palace to certain death. 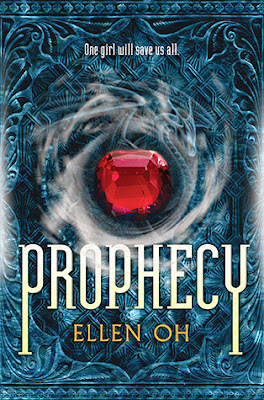 The loss and the violence of war aren't sugar-coated. The deaths are brutal and the losses pile up, as Kira and Taejo and their small band are go on the run to the safety of a hidden temple. Though they at last reach their objective, as they wait for things to calm in the capitol, they make stupid mistakes and get emotional. Kira can't stop thinking about the safety of his parents, Taejo is dying to know the fate of his mother, and all the temple monks keeps talking about this ...prophesy of Dragon Masado that no one can make sense of. Someone is supposed to be a dragon, and unite the Seven Kingdoms and save everyone. Is it Taejo? Is it Kira's older brother or their mother's older brother, who calls himself the Dragon King? When Kira and Taejo find themselves on a quest to find the things Dragon Masado needs to manifest himself, questions begin to finally be answered -- but the demons are already there.

Critical Reader Reaction: There has been a lot of criticism surrounding this novel, because apparently the ARC copy said something about "It's Graceling meets Eon." Mmm, no, it's not, really, but you certainly can't blame Ellen Oh for that; she writes the novels, not the jacket copy, and furthermore, sometimes PR people scramble when trying to describe something. From me, I'll just say I haven't quite read a book like this one before, and leave it at that.

While I felt the romantic drift was a tiny bit disingenuous - even a tough warrior would know what those fluttery feelings meant around a certain individuals - and I'm not entirely sure I buy that, in the midst of trauma and loss and drama she's feeling the urge for anyone, I enjoyed the pacing and the background of Ellen Oh's debut novel. While this is a really super quick review -- there is a LOT of setting and backstory in place that I didn't touch on, I felt she took the time to set the stage carefully because this is the first book in a trilogy. The history and action made me comfortable handing it to Tech Boy and saying, "Hey, you might like this one," but also with the knowledge that he gets testy if I don't have all three books in hand. He might not be starting it just yet. Still, both of us are fans of historical fiction and tend to gloss over things like fight scenes and that kind of drama, but it doesn't take much to have a lot of love for dragons, Tiger Spirits, and the like. I hope that in the following books, other characters will display special skills or spirits as well, not only so that Kira isn't so alone, but from the sound of the mess about to break out, the girl's going to need a little help, supernatural or otherwise.

I'm glad I got around to actually talking about this book before I get my hands on the sequel - do stay tuned for that review.

My copy came from the library. You can find your copy of PROPHESY by Ellen Oh at an online or independent bookstore near you!

Posted by tanita✿davis at 5:23 AM
Labels: Ethnicity and YA Literature, Fantasy/Sci-Fi, Historical Fiction, Reviews, TSD Review