Well, you all know I can gush some about a book. REALLY gush. But, the pleasure of happening across a self-published gem like WITCHES BUREAU OF INVESTIGATION was such that I couldn't stop talking about it a couple of years ago.

I'd read the WBI2 sequel over a year ago, and realized this past weekend that I couldn't find the review for it. That's because I never wrote it -- I hadn't even done a short one! My brain fade, my fault, and nothing to do with how good the book was. To make up for it, I'm going to share both the back and front cover of the paperback version of this book, and tell you that it's THE COOLEST MIDDLE GRADE COVER I'VE SEEN TODAY. Yes. Yes, it is. It says, "READ ME!" to both boys and girls.

Along with a great cover, this book has an appealing set of main characters who are accessible and funny but realistic and smart, a bunch of slightly dodgy magical spells, including one for shrinking a Harley; a loving tour of some of Southern California's special places, a group of bumbling, and not-so-bumbling amateur detectives, as well as a rampaging demon - all the elements of a great story for a rainy afternoon. The novel is necessarily more plot-dense than the first, and the plot is complicated enough to require careful reading. The boys and the seniors remain their funny selves, but I found myself rolling my eyes a little at the "kids these days" tone at times; I don't know any sixth grader who doesn't at least know generally what the Underground Railroad is -- nobody would mistake it for an actual train. In spite of the slightly condescending "what are they teaching kids these days" moments (which I think I object to as both a former teacher and a former sixth grader), the novel is engaging and an action-packed read, and only slightly scary. I think this will be a winner for kids about nine years old and up. 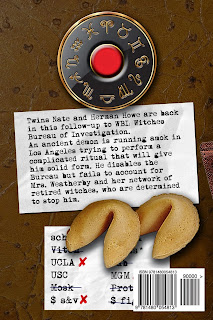 Concerning Character: Nate and Herman Howe are NOT having a good day. They've been privileged sixth graders for exactly two weeks, and SOMEBODY has pulled a huge prank in the Quad where only sixth graders area allowed, dropping the ginormous globe from the Los Angeles Central Public Library right into the middle of it. Oh, and while they were at it, they gave the maintenance guy, Carl, a new tattoo, too. Nate and Herman know who to call when things get hinky - their mother, who is now working at the LA branch of the WBI, that is, the Witches Bureau of Investigation. After their last adventure, they're not taking any chances.

Too bad no one's answering the phone at the WBI. 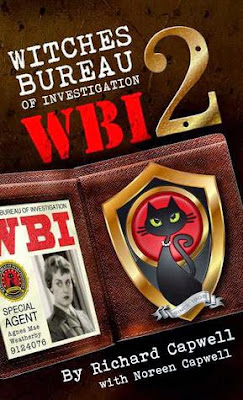 Too bad it says the number is "no longer in service." Too bad there doesn't seem to be a such thing as the WBI anymore... and that they're father was touring the LA facility just that day. Too bad nobody's answering Mom's cell, or Dad's...?

More than a little nervous, the twins are awfully glad to find out that the network of retirees, led by Mrs. Weatherby, is still in existence. Unfortunately, THEY don't know what's going on either, not quite. With the help of the intrepid little person and techy-witch, Doris, they figure out pretty quickly that someone has done a nasty spell, to take WBI out of existence. They know it's probably a non-corporeal demon -- actually the ONLY non-corporeal demon with the power to do that, the Zodiac Demon. But, the problem is, he's trying to become corporeal. He's been trying for thousands of years, but it looks like today's the day ... On the surface of things, it looks like there would be no way for this demon to materialize. He'd have to say twelve incantations in twelve different places, all having to do with the Zodiac. Once upon a time, that wouldn't have been such a problem, as The Zodiac symbols weren't things people just had laying around. But, Southern California - being an area devoted to movies and the magic of the screen - has variations on the Zodiac all around that are close enough, from the look of things. This modern version of the demon is making do with what he can get -- as fast as he can. Nate, Hermon, and their band of stalwarts have to not only outsmart the demon, who is doing an incantation an hour, but make him unable to finish his ritual -- the ritual he's been practicing for thousands of years...

There's no way they're going to make it in time to save the world this time. Just no way...


This was an independently published book I got for myself. You can find Witches Bureau of Investigation, 2 by Richard Campbell with Noreen Campell online, or at an independent bookstore near you!