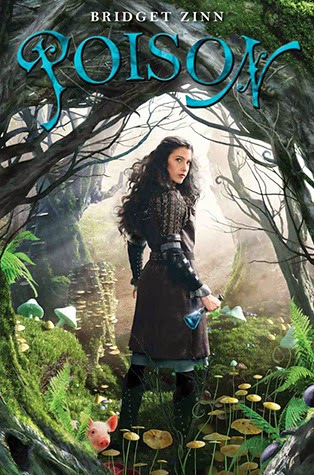 The first and only time I had the privilege of meeting author Bridget Zinn was during Kidlitcon in Portland a handful of years back. About my age, she was sweet and funny and quiet and one of so many kindred spirits I met that weekend, my first ever Kidlitcon. A fellow writer, a fellow blogger, her untimely death from cancer really hit me—and I'd hardly had a chance to get to know her.

Her posthumously released YA fantasy, Poison, gave me another chance to know her, even if it was just a glimpse. It was such a bittersweet moment to see it on the YA new releases shelf at my library. It was a long time in coming, yet at the same time, too late, and reading it made me want to cry because we've already lost her voice. But it also reminded me: those of us who want to write should write, must write, before we no longer have the option to do so.

Reading Poison made me so sad that we won't be reading more from Bridget, that the world of readers won't have any other opportunities to know her through her writing. Like her, the book was funny and sweet and imaginative. Fans of Terry Pratchett's Discworld series, Jasper Fforde's Last Dragonslayer books, or Standard Hero Behavior by John David Anderson should give this one a read. At the beginning, all we know is that Kyra is on the run—she's gone from being one of the kingdom's most lauded potions masters to being on the lam, and all because she tried to kill the princess. Oh, and the princess? Used to be Kyra's best friend. All Kyra's got now is her secret forest hideout, her wits, and her as-yet-unsuccessful vendetta against the princess. And if she doesn't succeed, the entire kingdom is at stake.

This book is a study in how to gradually reveal a backstory full of twists without annoying the reader. There are SO many books out there that feel like the author is manipulating the reader into a feeling of suspense, or a moment of revelation, using a gratuitous info-drop. Zinn did a really good job, on the whole (with just a few exceptions), of timing when to insert critical information about what happened in the past without making me feel like the character (or the author) was hiding something from the reader. We start off not knowing anything about Kyra except her immediate situation; but as she continues to forge stubbornly ahead on her quest, as she gets to know the infuriatingly handsome adventurer Fred and even begins to grow fond of the piglet she's been saddled with (a piglet who, incidentally, is the only one who can help lead her to the princess)—as we get to know her as a character, we are also introduced to how she landed in this mess in the first place. And, of course, much as Kyra tries to ignore her past to fulfill her goals in the present, her success depends on embracing who she is AND where she comes from.

The characters were so real, and so funny—that was my favorite part of the book, though I of course enjoyed the quirky fantasy aspect. The banter between Kyra and Fred, between Kyra and the princess; the growth Kyra shows in her dealings with others; the sometimes-hilarious hot water she lands in—all were satisfying and enjoyable and made me laugh out loud. Ultimately, the very real danger and creepiness of the bad guys, and the sincere, determined efforts of the good guys, made the happy ending well earned.

You can find Poison by Bridget Zinn online, or at an independent bookstore near you!
Posted by Sarah Stevenson at 2:09 PM
Labels: Adventure, AF, Fantasy/Sci-Fi, Humor, Reviews