TURNING PAGES: A CREATURE OF MOONLIGHT, by Rebecca Hahn

This is an unusual YA novel. I'm quite a bit in favor of the cover -- the deeply colored night sky, the swirls of the font -- it's just striking, isn't it? I'll bet the author just happy-danced when she saw it. It says "fantasy" without adding, "for girls" or "for boys." It's fantasy for anyone who loves the night, and creatures of moonlight.

This is a novel for thinkers; the plot begins at a stately walk which, honestly, may seem to some readers more than a tiny bit too slow. There is hard work without details, sweat, or the actual experience of broken fingernails, glossed over with an air of unreality -- which is how work often appears in YA novels. For all of this traditional fantasy nvel surrealism, however, there is in the haunting and beautiful prose, the lasting charm of the real.

This novel contains a sprinkling of moonlight and romance... but just a sprinkling. There are courtiers and gossips... but none of them matter. There are dances and dramas, fine foods, fine clothes and flowers... but only one is what our heroine wants. There are kings and queens; princesses, and men, a Goliath and a David with their wills clashing. (There is a punch in this novel that was so viscerally satisfying that I got prickles over my whole body Honestly? There need to be more girls punching in YA lit. I may need to work on remedying that.)

And, there are trees, in the wood... more trees than ever before. There are trees, and, within the dark of the woods, there is knowledge. And really, that's all a girl needs...

Concerning Character: Marni isn't exactly a farm girl, but she's close enough. She's been in rough, patched homespun, scrabbling to tack up vines and uproot bushes, hoeing and weeding and clipping and fertilizing for as long as she can remember. She and her white-haired Gramps live in a simple cottage in the midst of the most beautiful flowers in their corner of the world. Marni has the knack for making them grow, for cultivating the tallest hollyhocks, the most vibrant and scented roses, the prettiest daisies, and the showiest buttercups. Winding around the porch railings are enormous, purple morning glories, and winding through the garden are the intransigent, blue dragon flowers... which Marni doesn't even try to get rid of anymore. Dragons are allegedly in her heritage, after all. 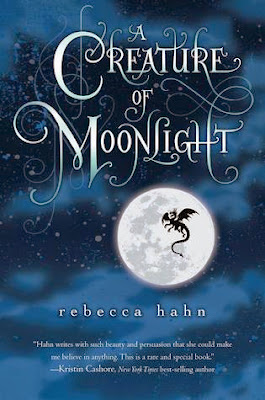 Supposedly, her father is a dragon, though Marni has never seen him, and she's sixteen. All she knows is that is an orphan -- that her mother is dead, and that her mother's brother - the King - her uncle is the man who killed him... and would like to kill her, too. Unwanted, by anyone but her grandfather, Marni is used to being the odd girl out, the misfit in the village -- the girl who can read, and can almost speak as nicely as her grandfather. Marni never wondered what would happen, if the courtiers who still came around to talk to her grandfather someday stopped to talk to her. Marni had no ideas above her station at all. She had her little place in the world -- next to her Gramps, in the simple cottage where they live. And, without giving too much detail, so as to provide spoilers, one day Marni's little place in the world is gone -- and what follows next is a heroine's journey out of her small corner into the world, into the great, wide expanses of possibility -- and back again.

Critical Reader Reaction: I promise not to drag the story forward under bright lights and interrogate it for metaphor, but I do find it intriguing that the Woods is a character in this novel -- almost as much as the Woods as a synonym for the evil unknown is a character in any 17-early 19th century novel. The ordered, settled village fears the disordered, wild wood, and yet, the denizens of the wood see it as a veritable Eden, a garden of all pleasures and beauty. The irony of this novel is that each aspect is explored so thoroughly, and it turns out that the wood? Is none of the above. So like most of the things we cultivate assumptions about in life... This book has a very classic feel to it, and much context and subcontext to dissect and discuss. This would be a fun one to use for an English lit class - a delightful, delicious helping of story, and something more.

I received this ARC courtesy of the publisher. After May 6th, you can find A CREATURE OF MOONLIGHT by Rebecca Hahn online, or at an independent bookstore near you!