If you know anything about the situation in the Democratic Republic of Congo (formally Zaire), you know that it lacks infrastructure and honest leadership. It is currently the province of Uzi-toting warlords and their murderous bullyboys, and it's a nasty, nasty place to try and make a living as a miner, or to make a safe place for a family. This novel bounces in between a refugee camp, where a Congolese family has fled, after rape and murder, a factory in China, where cell phones are assembled by painstaking, blistered hand, and to a home in Vancouver, where, one night, a phone was misused.

There's a lot of geopolitical territory worked into one novel, and at times the reader may feel a little overwhelmed -- but at the same time, the reality on which it is based is all too true. In the tradition of Cory Doctorow's FOR THE WIN and Paolo Bacigalupi's SHIP BREAKER, as well as Terry Farrish's THE GOOD BRAIDER, there's no traditional "happy" ending to this true-to-life tale -- but everybody survives. And that's just it: it's a novel about survival. But, isn't there supposed to be more to life than that?

Concerning Character: SYLVIE is dutiful, but desperate. At fifteen, she is junior mother to nine-year-old Pascal and six-year-old Lucie, but fourteen year old Olivier will no longer follow her lead. Disappearing for days on end, poaching outside the Tanzanian refugee camp where they live, running errands for the nastiest thug in the camp - a thug who is doing a black market trade in coltan, the mineral for which their father was killed, and their village razed. Olivier is a constant thorn in Sylvie's side, as she hauls water, and spends her days cooking, cleaning, and standing in line for provisions, all the while silently accepting her mother's criticism that no one will marry a sour woman. Sylvie knows what her mother means to say -- no one will marry a scarred woman. And, honestly -- Sylvie's just as glad no man wants her anymore. Until one does...and won't take her "no" for an answer...

LAIPING's cousin Min told her of the wonders of the factory job she had in Shenzhen. High tech jobs, she'd told Laiping proudly, were the best. She could make real money, making cell phones. It was the way to opportunity, and there was a dorm, a theater, and swimming pools for the lucky workers, too. A TV! Phones! Good clothes! Surely, everyone would come out from their poky little farms to work in the city for such luck.

Underaged, but deeply worried for her frail parents, Laiping is determined to make good. Soon, her world narrows to capacitator-solder-place, over and over again. Who knew the little blue-flecked chip of electronics, made from the special African mineral, could be so important? Such a tiny thing - but so important to Mr. Chen, the company owner, Mr. Wu, her supervisor, and to the thousands of workers who listen to the daily exhortations and strive harder to do better -- because those who don't work hard today will have to work hard finding a new job tomorrow. So what if Laiping's neck cramps, and her fingers blister from learning to solder? So what if the dorm room is stacked three high with bunk beds, a factory snoop watches her both at work and in the dorm room... she's living the farm girl's dream, isn't she? But, why are those high rise dormitories surrounded by nets? At least Laiping has a friend, Fen has stuck with her through thick and thin. When there's trouble about her wages, it seems like the boy she met the first day at the factory might have the answers to making this factory job work for her -- or, he might just make it all worse... 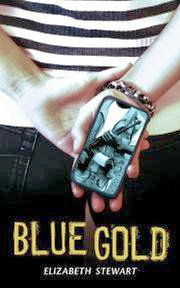 FIONA's mother hates it when Fiona's father springs for the latest tech for her, because it is a luxury -- not a necessity. Since he remarried, Fiona's dad is alll about the luxuries, though, and Fiona's good with it. She has a pretty sweet phone, and, okay, it's nice to have the things, all right? Despite her Mom's carping, there's nothing wrong with it, and it's tiresome to hear her mother criticizing Dad's coltan mining company. Fiona would rather not know who has human rights issues, and what trouble is going on in other countries -- she's got enough problems of her own. Yeah, so once she sends an unwise text. But, that doesn't mean she's a bad person. That doesn't mean she's stupid, or that she deserves everything they're saying about her. It's not fair that all of the choices she makes now seem wrong.

In the midst of her own suffering, Fiona gets a glimpse into the suffering of another... Having her heart battered teachers her a little compassion for someone else. But, is compassion enough?

Critical Reader Reaction: There are no easy answers for this, and the afterword goes a long way toward both explaining the author's real world point of view, and informing the reader on where to go to get more information. That will be MOST appreciated, as most readers will come away from this with a "what do I do next!?" kind of feeling, and many will feel both resentful and guilty about their electronics.

This is very much an issue novel, but I appreciate that the author does her best to create a real story, with realistic pacing, slow and fast moments, danger and pain. I felt there were some missed opportunities to make the North American girl more realistic. I felt closest to the African and Chinese characters, as their confusing and horrifying situations were not of their own making. It was harder to feel compassion for Fiona - and hard to believe that the fulcrum on which the lever of changed rested was on her small shoulders - but this made a troubling but satisfying expose into a real situation. Well worth reading as a social studies companion, or for entertainment, and guaranteed to open up real conversation on what to do and how to be in the consumer sense.


I received this copy of the book courtesy of Annick Press, in return for the opportunity for an unbiased review. You can find BLUE GOLD by Elizabeth Stewart online, or at an independent bookstore near you!