Monday Review: DEAD TO YOU by Lisa McMann 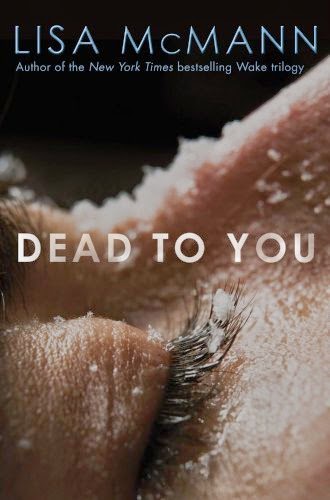 I've been catching up lately on Lisa McMann's books. I'd read the Wake, Fade, etc. trilogy some time ago and enjoyed them—quick reads with enough character to anchor the stories but still very spare in many ways. Good ones, I would think, for reluctant readers. So, a few months ago I read Crash and Bang from the Visions trilogy (the third book is due out in June) and I liked those even more—they had the same economical writing style and good characterization as the first trilogy, but I found the premise much more interesting and the story more gripping. (I haven't reviewed those yet. I will probably do a trilogy review after reading the third book.)

Then, I saw there was a standalone novel from McMann that I had missed, with a non-monosyllabic title this time: Dead to You. Again, we've got the suspense and high-stakes tension of her previous books. This time, though, the tension is created not so much by action and paranormal abilities, but by the fact that the narrator—Ethan—does not remember crucial parts of his past. By extension, then, it's just as much of a mystery to the reader. And it's this lack of knowledge—who Ethan is, and who he could be—that drives the plot in many ways.

Ethan has been missing. For ten years now. The last his family saw of him, he was seven years old, playing outside with his little brother Blake, and then he got into a car with two strange men and never came back. But he doesn't remember that anymore. He only remembers his tumultuous life after that: his new mother, Ellen, who eventually tired of him and dropped him off at a group home; and then life on the streets for the past year. When he found a photo of himself on a missing children website, he got in touch with the authorities, and as the book itself begins, we see Ethan's reunion with his family.

But all is not sunshine and roses, because—well, because Ethan doesn't remember his family. He doesn't remember anything from before. But his family is patient. They give him time. He bonds with his new little sister, Gracie, who was born after he disappeared, and his childhood best friend, Cami, who of course is all grown up and hot now. His return to real life is going pretty okay…except for Blake. Blake doesn't believe Ethan is Ethan, and his escalating attempts to "prove" Ethan is an impostor make things more and more tense until it starts coming to a head.

I'm not going to say more—I don't want to detract from the suspense—but this was a fairly riveting read, what with Ethan's difficult adjustment, the learning curve that comes with reintegrating with his previous life and with "regular" society. My only caveat is that I had mixed feelings about the ending. I was left wanting something more, but at the same time, given how the story unfolded, I couldn't imagine how else it could have ended. I'm not even sure how to articulate what I mean. I guess I do need to say SPOILER ALERT and say something more…skip the next paragraph if you don't want to know.

You can find Dead to You by Lisa McMann online, or at an independent bookstore near you!
Posted by Sarah Stevenson at 4:28 PM
Labels: AF, Guy Appeal, Mystery, Reviews, Suspense