"The truth is not always pretty. It can be disturbing, enraging, and enlightening. I found my way out of Hell by choosing Truth, and, regardless of anyone’s opinion, I am committed to telling Truth AND extending Hope, through my stories." - Beth Fehlbaum, "When Story Touches a Nerve," Nerdy Book Club Blog, Author Posts, April 6, 2014

Kirkus, in its starred review of BIG FAT DISASTER, says "The fast pace, lively...dialogue, and timely topic make it a quick and enjoyable read." Honestly, I'm not sure what book Kirkus was reading. Don't get me wrong - the pace is fast, the dialogue is lively, and the topic is deeply timely, but this book is not what you can call enjoyable - it is cathartic, it is authentic, it is painful and incredibly real, raw, and honest. There is even a glimmer of hope, in the end. But I don't think "enjoyable" will be the word for me.

Taken individually, the incidents which take place in the novel are together enough to send a person crashing to their knees. Put together, they are overwhelming, leaving this story of a life unfinished, as unfinished as any life would be in the midst of healing -- which is going to take a long, long time, longer than any novel would ever go on.

This is not a novel about a fat girl who suddenly found the religion of dieting, the god of svelte, and was saved, hallelujah. Nope. This is a bit more... realistic. As I read along I mused, "This book reminds me so much of STAYING FAT FOR SARAH BYRNES," and wouldn't you know it, in the author essay on Nerdy Book Club, Beth Fehbaum mentions Chris Crutcher, and that very same book. Prepare yourself for that level of honesty.

Finally, if you've ever suffered from an eating disorder, weight issues, or seriously considered suicide, prepare yourself...this book is by someone who has been there. She knows. Take seriously the helpline information at the end. Don't forget that this book takes you back to the dark places - but Colby's getting out, and the rest of us can, too.

Concerning Character: Colby is not fond of cameras, eyes on her, and judgement - and her father is running for Senate. Unfortunately, Colby's getting a lot of flak about how much of a detriment to his run. His image doesn't call for an insecure fat girl in the background - his family values platform shows he values family that looks ...good. Unfortunately, things are about to look a lot less good. Colby's just found out something about her father -- something that can't be taken back. It's bad enough that her stupid sister Rachel picked a fight with her when she was trying to get out of singing with the Young Conservatives choir for her father's latest election appearance, Rachel made her spill coffee on her father's desk. It's much worse that in trying to clean up, she accidentally found a picture of him...with his tongue down some woman's throat - some woman not her mother.

It's not the first fracture to hit their picture perfect life, but it's the first one that Colby doesn't feel like she's caused by looking - and weighing - like her father. She's nothing like her mother, and also nothing like her two sisters, who are pretty much mini-Miss Texas clones, which is what her pageant-winning mother was, sometime back in the eighties. Colby's not really ...pageant material. She's a binge-eating, nervous wreck, and now that her father has betrayed her mother, she's a binge-eating, nervous wreck whose mother hates to even look at her. If you thought her life was bad before, it gets worse. The FBI seizes the family's assets, after determining that her father stole from his campaign fund. Now, they have to move into the single-wide trailer behind the house of her Aunt Leah - the family black sheep. A new school, a new place to be humiliated by her father's very public fall from grace -- and a new place for her mother to pressure her about her appearance. Bullied, hounded, and hated, it's no wonder Colby feels like her whole life is a big, fat disaster. 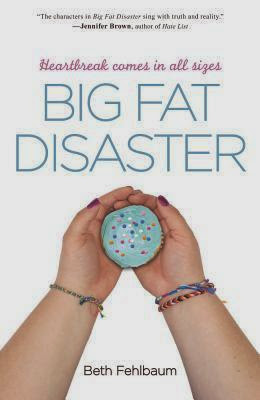 Reading Critically: First, I have to give kudos to the design team for allowing a pair of plump arms to be shown on the cover of a YA novel. This is fairly groundbreaking stuff, and honestly, I don't know that I've ever seen evidence that rounded, full-figured, plus-sized, zaftig, rubenesque or otherwise heavy people exist in YA lit. So, well done, book designers.

This is a novel about a lot of things - adultery, political graft, date rape, bullying, and eating disorders. Because Colby is a classic example of an unreliable narrator -- she believes that "everybody" hates her, and that "all" the kids think this or that. This narrow viewpoint distorts her picture of herself, and her place in the world. While some of what she believes is true, much of it is not. SOme readers may have trouble identifying that Colby is unreliable, and feel overwhelmed or disturbed by her version of truth. I encourage those readers to read on.

Is there a such thing as "too much" truth in a YA novel? It's been "suggested" to me as a writer not to write about certain things in my life because "no one would believe you," and seriously, I get that: some of the over-the-top, Craytown Bus stuff that I've experienced and observed - who would believe that kind of stuff and those kind of people existed - exist, still, even - in real life? But, just because "nobody normal" would believe it... should writers keep silent?

I don't think so. For myself, personally, I don't write some stories because they are filled with, and overlap with stories not my own to tell. I am not yet to a place where I can separate mine from others, and frankly, I think I'm still too emotional about some of the stories to be balanced and impartial, as a good storyteller must be. Other authors make other choices, of course, but I don't believe that there's anything like "too much truth." Nobody "normal" would believe what was being said and done to bullying victims like Hannah Smith, Megan Meier, or Morgan Musson, and, frankly, no one "normal" would be involved, but the bullying happened to them, and they died from it. Writers write from the place where they are, and as Beth Fehlbaum proves, writers choosing to write their own truths should not be silenced. "Find your voice," a character in the novel urges. It's hard to do, but it's vital. Find your voice, find your ears, bear witness, and live your compassion. < /rant >


I received a copy of this book courtesy Merit Press, via NetGalley. You can find BIG FAT DISASTER by Beth Fehlbaum online, or at an independent bookstore near you!

You write: 'Nobody "normal" would believe what was being said and done to bullying victims Amanda Todd, Rebecca Ann Sedwick, or Morgan Musson, and, frankly, no one "normal" would be involved, but the bullying happened to them, and they died from it.' Not true. This article about Rebecca Sedwick: http://abcnews.go.com/US/wireStory/portrait-bullied-girl-emerges-case-file-23225852
contains the quote: '“What is strange is that despite solid evidence of challenges associated with Rebecca’s home life, for some unknown reason, the detectives chose to spend all of their time in middle school ‘drama land’ trying to find someone to arrest,” Willard said.'
Cases of bullying always involve other problems. Try Hannah Smith http://www.leicestermercury.co.uk/Schoolgirl-Hannah-Smith-bullied-trolls-coroner/story-20621403-detail/story.html or the Megan Meier story. As for the Amanda Todd story, nearly all of it is pure fiction. Nobody 'normal' would believe it.

@ Phillip Rose~ Thank you much for your comments, and for the correction, which I've added.

In case I offended with the word "normal" in that instance, I was relaying what has been said about specific, real-life dire situations, that they're over-the-top, and that no one "normal" would believe that's what has happened in real life to real people.

I stand by my statement that authors have to write from where they are -- I think Beth Fehlbaum is writing from a place of rage and refusal to be silenced, and that's what works for her. These stories of suicidal bullied teens are very real and the pressure that they are under is unbelievable -- but that doesn't mean it didn't happen, doesn't happen, or shouldn't be written about, just to clarify my point.

Thanks for dropping by!