Monday Review: FROI OF THE EXILES by Melina Marchetta 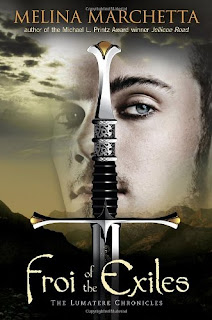 Reader Gut Reaction: I love this series, and it is absolutely killing me that some people have gotten to read Book 3 already (luckily, there's a companion short story available now--which I plan to devour). Froi of the Exiles is the second book, the sequel to Finnikin of the Rock (reviewed here), and it continues the story of the formerly-cursed land of Lumatere in a most interesting fashion. In this volume, we learn more about Froi, the young man who Finnikin and Isaboe brought back with them from a life on the streets in Sarnak. Froi can't remember who he is or anything about his life before he ended up in Sarnak, but he's devoted to the Queen Isaboe and her consort Finnikin, so when they send him on a secret mission to assassinate the King of neighboring Charyn, he agrees and sets off, in disguise as a Charynite noble. The only thing he's not counting on is being inexplicably drawn to the Princess Quintana…a princess everyone agrees is not quite sane…

Concerning Character: I can't go into too much detail lest I give away spoilers, but I was just as drawn in by Froi's tale as I was by Finnikin's in the first book. It takes longer to get to know Froi—things were a little slower in the beginning—but if you like a highly developed fantasy with complex characters you can truly believe might exist, then this is an amazing series. I am in awe of Melina Marchetta's ability to create a cast of characters that all ring true, that all have their own issues and motivations and hangups and dreams. Even the side characters are fleshed out, entirely convincing. And don't worry, we don't just follow Froi on his adventure; we also get to read about the continuing saga in Lumatere as well as the fate of some rather misunderstood refugees at the border of Charyn. ALL of it riveting, in my opinion.

Recommended for Fans Of...: Thoroughly developed, fully realized fantasy worlds like those in the books of Tamora Pierce, Terry Pratchett, D.M. Cornish, and any number of traditional grown-up fantasy authors.

Themes & Things: I'm a big fan of how classically EPIC these books are—epic in the sense of sweeping epic fantasy that fully immerses you in a detailed world, but also in the sense of dealing with classic story themes that you'll find in fairy tales—those dark, tangled versions, not the happy-sappy ones. The princess who needs rescuing, but not in the way you'd think…The suitor who isn't what he seems…The overarching journey/quest to find out who you are, and then the answer isn't what you thought it was going to be. The effects of trauma and abuse, of oppression both individual and on a widespread scale; the meaning of love, of loyalty, and of family; of nature versus nurture; of healing and discovering your inner strength and drawing on it, no matter how difficult the challenge may be.

You can find Froi of the Exiles by Melina Marchetta online, or at an independent bookstore near you!
Posted by Sarah Stevenson at 8:00 AM
Labels: Adventure, AF, Fantasy/Sci-Fi, Reviews