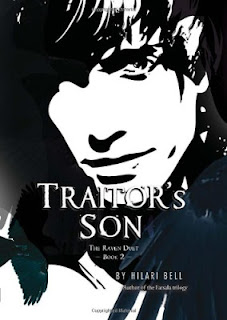 Reader Gut Reaction: I enjoyed the first book in this duet, Trickster's Girl (reviewed here) a lot more than I expected to, so I was pleased to find the second book was available in my library so soon after I read the first one (no waiting ages for sequels! yay!). I found that this second book defied my expectations, but in a good way. MINOR SPOILERS to come….

At the end of the first book, when Kelsa throws the medicine bag across the Alaska-Canada border and into the hands of a strange boy, it turns out that her quest also becomes his. Now, Jason is the one who must heal the land, and with his native roots, he seems to be the perfect choice. …Or is he? Like the first book, this one's got plenty of adventure and angst, danger and daring.

Concerning Character: So, this second book in the Raven Duet is Jason's story. At first, it felt jarring to suddenly leave Kelsa behind and continue the quest with a new hero. I mean, that's an unusual choice from a writing perspective, and surprising for the reader. But once I got used to the new setting (and—minor spoilers again—the new, ravishingly feminine form of Raven), Jason really fit well into the story. He's a reluctant hero, even more reluctant than Kelso, and he's got his aims in life, and his Native heritage is far more of a source of conflict than he'd like it to be. In fact, there's a rift between his father and the rest of the family, and most of them are holding Jason's father's behavior against HIM—sins of the father and all that. Jason is a very layered character whose backstory has appropriate repercussions for his own development and growth, as well as being integral to the plot.

Recommended for Fans Of...: Realistic fiction with a dose of fantasy. If you enjoy Charles de Lint, who incorporates North American and European mythological elements into his books, or other books about Trickster-y characters like those by Tamora Pierce, you might like this one.

Themes & Things: Jason is a mixed-race character, and his heritage is a major theme throughout the book. His self-identity and self-acceptance are tied into how he relates to the various parts of his family—his father, who has been ostracized by the Native community, and his grandparents, who live a more traditional lifestyle. And now he's got this whole quest thing to deal with. It's very satisfying to watch Raven break down Jason's reluctance and skepticism about healing the environment, and win him over to the idea that this earth is all of ours and we are all responsible, no matter how small or how large a part we play.

You can find Traitor's Son by Hilari Bell online, or at an independent bookstore near you!
Posted by Sarah Stevenson at 4:19 PM
Labels: Adventure, AF, Fantasy/Sci-Fi, Guy Appeal, Mythology, Reviews