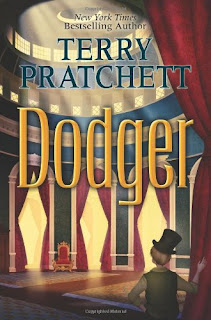 Reader Gut Reaction: OK, bear in mind that I am a big Terry Pratchett fan. I think he's an amazing fantasy writer, and I say this as someone who is not really huge on the Discworld series. So I was extra happy to run across another stand-alone of his in the library a couple of weeks ago: Dodger. His stand-alones, including the Discworld-related (but not fully Discworld-immersed) Tiffany Aching books, are the awesomesauce.

So is this latest one. A period piece—well, really, a sort of alternate-history-fantasy kind of thing--Dodger follows the adventures of the pseudonymous young Dodger, who scrounges for lost change and jewelry in the sewer to eke a meager living. But apparently fate was just waiting for an extraordinary event to test Dodger's mettle and lift him literally out of the sewers and into a whole new intriguing life wherein he meets Charles Dickens, Sweeney Todd, and Benjamin Disraeli and is caught up in adventures beyond his control. It's sheer craziness, and it takes place in dirty, nasty, fog-infested Victorian London, and I love it.

Concerning Character: Dodger is another one of Pratchett's memorable characters: a charming mixture of naïve and cunning, loyal and scrupulous yet incorrigibly criminal, but above all, someone who seems real from virtually the first page. Dodger is, yes, a tosher—a sewer rat—but he's also not going to stand by when someone innocent is getting hurt, especially when that innocent person is a very, very pretty golden-haired girl. And that sets the tone for his behavior throughout the book: simply by being himself, following his instincts, he is led on an adventure that tests his ethics and loyalties as well as molding him as a man. So he's very easy to cheer for, even in clothes covered in muck.

The other characters are equally engrossing, but my favorite of the rest of the cast has to be Dodger's mentor/roommate, the elderly gentleman Solomon Cohen. Solomon may be a poor old watchmaker, but has taken Dodger under his wing and made of him somewhat of a project, taking every opportunity to clean him up a little here, give him a life lesson there. What's more, he's got Dodger's back, and keeps an eye on him as things start to get dangerous and Dodger gets unwittingly mixed in with larger events. This being Pratchett, all the primary characters are well realized and deftly drawn with both humor and sympathy, even the bad guys, who of course eventually get their comeuppance. (No, not really a spoiler.) Oh, and I have to say I loved the Charlie Dickens character…such a writer…

Recommended for Fans Of...: Books about orphans or foundlings who have a great destiny to fulfill and go off on character-molding adventures: the Monster Blood Tattoo books by DM Cornish, for instance, or the Bloody Jack series by LA Meyer.

Themes & Things: For me, a primary theme that weaves throughout this book is the meaning of loyalty and friendship—and the fact that it takes many guises and can be found in some truly unexpected places. And there's also the idea of what it means to be A Good Person, even if you are A Good Person Who Occasionally Does Dodgy Things, as many of us are. I'm a sucker for that particular trope, apparently—the fallible, very human hero.

You can find Dodger by Terry Pratchett online, or at an independent bookstore near you!
Posted by Sarah Stevenson at 12:13 PM
Labels: Adventure, AF, Fantasy/Sci-Fi, Historical Fiction, Humor, Reviews

Oh, so glad you reviewed this one - sometimes I feel like I'm TOO-too much of a Pratchett person to be the one who reviews anything of his - but I enjoyed this one. It was quirky and weird and kind of fun. It's always good to see the world according to Pratchett - he can turn his hand to any genre and Pratchett-ize it.

Now, he needs to put out another Discworld book.