Written by a woman who can channel the voice of younger teen guys, this novel says "Boyhood Dreams" all over it. I loved the outright wish-fulfillment bits of this novel. I mean, this kid goes from being a nobody to being a hero -- from fairly weak and pimply to strong and studly. I can say that without giving away spoilers because the boy's just like it says on the package: a monster hunter.

This novel manages to be both bildungsroman and buddy tale. It has a strong male figure in the form of an uncle, it's got a bit of flag-waving, but in an acceptable way, and it's all about Mom's Apple Pie, Saving the World, and Taking Care of Business. And Monsters. A fast-paced self-pubbed action novel with funny asides that the 12+ crowd will really enjoy - even folks who might not want love reading.

Reader Gut Reaction: Matt Archer is so well-written - he comes across clearly as just a guy. By this I mean he is full of insecurities and obsessions, which he mostly doesn't say out loud, he is full of thoughts about a girl named Ella fairly constantly. He likes his friends, and sticks by them; he's a pain to his siblings (sometimes), a worry to his mother (not too much, but...) and is pretty far down the pecking order to the jocks at school. It usually takes his Uncle Mike to keep him straight. He adores his uncle, who has taken the place of his father. His Uncle Mike teases his mother, and even keeps his boneheaded jock brother in line.

Pretty much everyone should have an Uncle Mike.

Concerning Character: All is well in Matt's world, until he finds out that his Uncle is going back to Afghanistan. Then, Matt falls apart. It isn't fair. Mike's already been called up. He's supposed to be a reservist. The agony Matt goes through is realistic, and something to which children of soldiers might really relate.

Mike and Matt go on one last camping trip -- and then, EVERYTHING changes. Absolutely everything. Those things that go bump in the night aren't just faceless things. Matt's seen something that nobody in his hometown would ever believe... and he kind of hopes they never have to...

Themes & Things: Thematically, this novel is about powerlessness and power. Much like the Mysterious Orphan tales, which mirror the Hero's Journey, Matt is taken to a place he never expected, and forced into a role he never dreamed existed, much less knew he wanted or needed. After several rough starts, false confidence, terror and near-fatal mistakes, he comes into his own. It's A Manhood Thing. 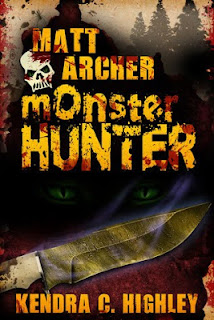 Cover Chatter: I didn't get to see this cover in its full glory until I got online - the ebook version of it was in shades of gray for me - and in the interest of getting to the story, I frankly didn't pay too much attention. However, now that I've seen it, I cannot but love the wee monster eyes. ☺ The knife and the skull give just the right touches of darkness and drama.

A lot of work was put into this novel - not just story, plot and proofreading, but thematic elements, and cover. I just want to say, PUBLISHERS, TAKE NOTE! This indie author is another one to watch. Good luck, Kendra Higley!


FTC: This novel provided by the author in ebook form, review unsolicited.

You can find MATT ARCHER, MONSTER HUNTER by Kendra C. Higley at CreateSpace, or a Barnes & Noble online retailer!