One of the rare straight SF novels of the Cybils season (not that rare overall, but this year has some better science than last, I think) this book was meant to be a quick sip whilst doing something else, and I ended up putting off whatever else it was I was doing to finish it.

Reader Gut Reaction: The book reads a great deal like a Scott Westerfeld novel of old - there are Stakes, there are True Friends, and there is action all over the place - running, ducking, escaping, shooting, and lying like bad rugs. And it all takes place in ... Long Island. Which seems like a sort of odd setting, I mean, it's a suburb. But, that's where the action's at.

It's not a perfect novel, by any means - I can see Ill-Fated Romance coming, but fortunately it doesn't show up in this book, and there's definitely hope it won't happen - I may just be cynical. I don't buy Kira's boyfriend's place in the novel - he's A-freaking-nnoying, and he seems only there to be the representative for Teh Establishment (TM) - I don't see his übermicromanagement as caring, anymore than I'd see an overhanging cliff that could collapse on my head as a sign of love, but some people read things differently. Anyway, it's a diverting book with some good examples of amazing friendship, hacker-tech (the Mp3's Kira's friend collects are great), and interesting intellectual issues of a woman's control of her body (there's a LOT of that in YA lit lately).

Concerning Character: Kira is sixteen, a medical assistant, and not really keen on her job, which is, at this point, collecting data about dying babies. Humanity is failing, because the mortality rate for infants is at 100% - babies are dying right around the two week mark, because of a RM, a virus that was unleashed by the Partials - factory made, partially human supersoldiers who rebelled - as an act of war -- and which decimated most of the world population. In this haven of population, those who choose to live there, live by the rules of the Council - who keeps lowering the age of consent for women to have babies. The Hope Act isn't just ASKING people to have babies. They've lowered the age to sixteen now, and it's every girl's DUTY to have a child. Someone's baby HAS to survive. The science behind the deaths has to break at some point. 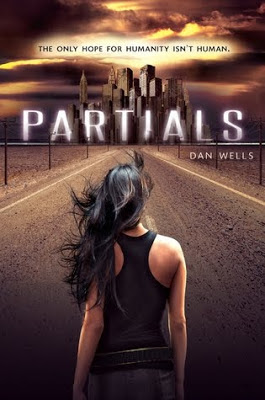 Obviously, not everyone is going to agree with what the council wants. People on outlying farms are being killed - in acts of terror by dissenting people. Everyone is in fear, everyone is obeying the council without question - everyone but Kira, and a few of her friends. Kira desperately wants to save humanity, and to that end, she's decided she needs to find a Partial, and study it. After all, they unleashed the virus. They survived. Something in their blood must be the answer...

Cover Chatter: If there were a virus that had decimated Long Island, most of its buildings would be standing. Most of its malls would still be filled with clothes. Its only issue would be the unfortunate piles of the dead. This is reflected pretty well on the cover of this novel - a road, still paved and painted. Fences, still standing. And a faraway city that only looks good from a distance.

While still not a fan of the woman-on-the-cover thing, and while I think showing an actual partial - faceplate and all - might give this more of an edgy, SF feel, this cover is one of those "does-the-job" types that just produce a shrug. Not great, but not awful, either.


You can find PARTIALS by Dan Wells everywhere, including at an independent bookstore near you!

Posted by tanita✿davis at 1:47 AM
Labels: Cybils, Dystopian, Fantasy/Sci-Fi, Reviews

Hmm...sounds like an interesting premise and character setup, anyway...your descriptions of the relationships aren't sounding like ringing endorsements, but I do like the idea of another futuristic, tech-y one for teen readers.